Independence is loyalty to one's best self and principles...

If you like your trigonometry online and interactive then Touch Trigonometry is for you.

The loneliest whale in the world has been tracked by scientists since 1992.  During that time he hasn't, as the Bard would say, "made the beast with two backs."  (Humpbacks?  Double double entendre!)  They say his celibacy is due to a unique, high-pitched voice and the fact that he travels well off the beaten path.  <Insert self-deprecating comment here.> 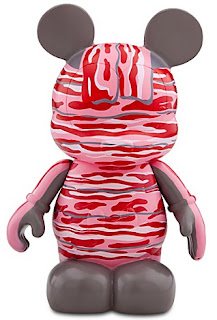 Delicious bacon Mickey.  Limited edition of 600 by artist Thomas Scott.
Some interesting studies show that daydreaming can lead to more creativity and that the ability to surf the 'net at work makes you more productive in the long run.

My clock fetish reveals itself again: The Colour Clock displays time as its hex color value.

Know a geek who's birthday is coming up?  Here are 11 cheap gifts for geeks.    I like the EcoSphere but I suppose some tiny-shrimp-hugger from PETA is going to ruin this for all of us.

Fan calls Super Bowl in Cowboys Stadium "absolutely the worst experience ever."  Congratulations, Jerry Jones.  I hope that your cattle-car experiment to attempt an attendance record was worth it.

Last week was Engineers Week and here are just a few engineer-related posts I found ran across.
Business of Software 2011 has released their call for speakers.  Lightning Talk anyone?  "15 slides, 30 seconds each on auto switch. Sit down. Enough said."
This week's CAD Smackdown, a discussion about direct versus parametric modeling, is available for your listening pleasure.

Beyond PLM wants us to start thinking more about using frameworks to exchange data within an organization rather than file formats for exchanging data with other parties.  What was more interesting to me was data showing the most popular CAD systems (CATIA V5 and SolidWorks are leading) and the factoid that STEP is the leading CAD format for data exchange (32%).

Five reasons why no one reads your blog.
Along those same lines, here are 21 writing mistakes you shouldn't make on your blog.  #5 Your paragraphs break the 4-line rule.

Steve Dublanica, author of Waiter Rant, is available to speak at your event.

My Cold War fetish reveals itself again.  The Power of Decision is an Air Force film from 1958 depicting a US-Soviet nuclear war scenario.

McSweeney's offers this insight into what your favorite classic rock band says about you.  A few highlights:
Early Macs had a button labeled "Do It" but users often thought it said "Dolt."  Hence, the OK button was born.  I use "OK" as a verbal crutch.  Here's a story of how OK came to be used worldwide. (Please note: It's OK.  Not ok or okay or O.K.)

Does your business have a marketing plan?  Is it kinda dull?  Here are 7 tips to spice-up your marketing plan.  #3 Create education-based marketing materials.  Rather than yet another article about how marketers are a bunch of lying dolts, here are the top 10 lies that customers tell.  I like #8, I will read your brochure.  The advice here is to stop depending on your brochures as anything other than proof that your company has marketing money to burn.

Lockheed Martin has created a special site just for their presence at Avalon 2011, the Australian International Air Show.

Time magazine offers their list of the 100 greatest toys of all-time by decade.  The heart of my toy-playing days were the 1960s and I'm glad to see the SuperBall listed.  Made from zectron (cool!) they were making 170,000 of these things per day.  It was a marketer's dream cuz eventually kids would take the thing outside, throw it down as hard as they could on the sidewalk, and the last thing you saw was the ball's incredibly high arc before it was lost forever over some fence or house or major 4-lane road and you'd have to buy a new one.  For this reason my mother confiscated mine and kept it in a kitchen drawer.  I later liberated it which is why I'm holding mine while I type this.  (Mine is the Wonderball XF22.)


My crossover/mashup fetish is revealed again: the Predator Opera.

Harry Frankfurt in his essay On Bullshit tackles the salient issues of the day: "We have no clear understanding of what bullshit is, why there is so much of it, or what functions it serves."

Do you like laughter?  Do you like French laughter?  Then HaHaHaHa.fr will keep you busy for hours.  (Be sure to use the keyboard shortcuts instead of the mouse.)

I was going to post a link to an article about the lost art of editing but it's on the Guardian's site and I'm loathe to link to that <redacted>.  On the other hand, the London Review of Books offers a long article on the fate of Kafka's unpublished works.  While on that subject I'll inject this comment about The Metamorphosis: Gregor's physical transformation into a cockroach is not the main point of the book.

...and this is often disloyalty to the general idols and fetishes. ~Mark Twain
Posted by John at 4:36 PM

I have a week's worth of enjoyment coming from this post. I will comment as it takes place.

For now: that Trig site was impressive. I taught myself some Trig when a friend of mine said she went para-sailing from behind a motor boat. She told me how long the line was and I wanted to figure out how high she went.

I think you judge someone's classic rock preferences by the CD box sets they own. Therefore, it's Led Zep for me.