There are precisely two reasons for combining my review of these two albums. First, I'm too lazy to write two separate reviews. Second, both albums feature versions of the King Crimson song Thela Hun Ginjeet.

Bassist Lorenzo Feliciati is the driving force behind the band Naked Truth. Influenced early on by Led Zeppelin, King Crimson, and Weather Report he has become one of Europe's most respected bass players and overall musicians.

Frequent Flyer is subtitled A Diary of a Travelling Musician and features Feliciati playing with various combinations of 17 other musicians. While Naked Truth classifies themselves as "omni-genre" this album has Feliciati more focused on jazz or fusion.

Standout tracks on Frequent Flyer include 93, performed with Pat Mastelotto on drums and Aidan Zammit on organ and strings. 93's up-tempo drumline is subdued by Feliciati's melodic bass and Zammit's orchestration. Cuong Vu (trumpet), DJ Skizo (turntables), and Pier Paolo Ferroni (drums) combine on Never Forget to bring a flavor of Naked Truth's jazzier leanings to the album with a smoky almost ambient feel. The White Shadow Story with its laid back funk is my favorite track on the album and features Daniele Gottardo on guitar, DJ Skizo, and Ferroni.

You can read more about Feliciati and hear some of his music at his website, www.lorenzofeliciati.com. 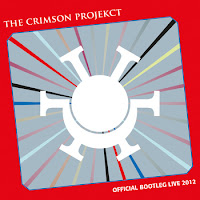 Official Bootleg Live 2012 is a live album from The Crimson ProjeKCt, a double trio consisting of Stick Men (Tony Levin, Markus Reuter, and Pat Mastelotto) and a variation of Adrian Belew's Power Trio (Belew, Julie Slick, and Tobias Ralph). If that line-up is too confusing for you, Levin, Mastelotto and Belew are former members of King Crimson and the two trios (who tour separately) came together as an opening act for Dream Theater. This is a recording of that act.

The album consists of eight tracks centered on music of the early-1980s King Crimson lineup but also ventures back to 1974 for Red and forward to the 1990s for B'Boom, Thrak, and Dinosaur which is how the album begins.

There are no surprises on Official Bootleg. You get fresh, live performances (perhaps with a slightly different accent) of King Crimson classics. For me, the album really picks up on track 4, Elephant Talk, from1981's Discipline.

You can purchase Official Bootleg from Iapetus Records.

As for the previously mentioned versions of Thela Hun Ginjeet (an anagram of "heat in the jungle") Crimson ProjeKCt's version is a driven, faithful-to-the-original telling of Belew's encounter with muggers during a break in Discipline's recording sessions. Feliciati's version, on the other hand, begins with a bouncy, Latin-tinged bass and drum duet but changes to melodic interplay of the vocal line and Feliciati's bass.

So whether you're looking for fresh versions of classic progressive rock or new fusion from a master musician you'll find something good on the Crimson ProjeKCt's Official Bootleg and Lorenzo Feliciati's Frequent Flyer.