A rich man is far poorer than a poor man...

Must-see photos of the week: pilot ejects from CF-18 seconds before crash. (I tweeted this several days ago but it's worth a repeat.) 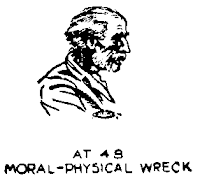 Find out how I got here from the
Two Paths.
This is going to come in handy: the DIY Online Reputation Management Kit (new one for me: Social Mention).  C'mon, you've created a Google alert for your own name, right?

Once you see it you can't look away: the tesseract.  Neatorama provides this nice overview of mathematical objects, including my favorite - the Gomboc  (think Weeble).  Science can be applied to anything, including the cuteness of Japanese schoolgirls. (Those in the know will recognize this as the golden ratio.)

Right now it's 5:21 a.m. tomorrow in Tokyo according to Every Time Zone.  NVIDIA announced their new LCD-compatible 3D Vision Pro stereoscopic glasses.  Chrysler switched to Seimens PLM software.  One man's tribute to the first supercomputer: Daryl Brach builds a PC case in the shape of the Cray-1.

Rob offers three tips for getting people to read your email newsletter:
In the year 2050 there will be 2 billion people over the age of 60 (and I will be 88).  The significance of this escapes me, even with all the cool, animated data visualization tools at GE's Our Aging World. 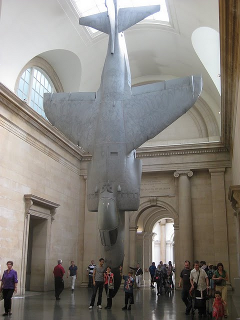 I keep telling you that I'm not a fan of sculpture, but I keep showing you more of it.  Fiona Banner's Harrier and Jaguar installation at Tate Britain is one I just don't get.  Hang a Harrier jet from the ceiling to create tension between our perception and experience of it?  Don't get me wrong.  It'd be awesome to have one of these at my office.

Photography also isn't my cup of tea, but here we go: a photograph featuring 34 months of exposure during the redevelopment of the Modern Art Museum of New York.

Peggy, you poor misguided person.  Please put away your friggin' phone when I'm talking to you.

Why is progressive rock so newsworthy lately?  Here's the A-Z of progressive rock from album to zappa.  (At least Phil Collins' jazz fusion group got some publicity at the letter X.) Even the Guardian (gag) gets onboard with an an article about the resurgence of progressive rock including an interesting quote about how it shouldn't be considered rock at all because "the ethos is completely different."

Yet another online music service.  StereoMood plays tunes that match your mood.   For example, I chose "feel like crying" and it played played some weepy shit by someone named Sia so it must be working correctly.

Just everyone shut up already and pay for music.  Trey Gunn makes his case for not getting ripped off.  (Doesn't that even sound funny to say it?  You have to make a case for not being robbed.)  And while you're at it, buy one of his CDs.

How much would you pay to use Twitter?  A recent survey revealed that no one would pay to tweet.  Other interesting factoid: average online time is 19 hours per week.  Why money makes you unhappy.

I sat down and watched my first, entire episode of Mad Men last week.  In honor of that event, here's the periodic table of Mad Men.  I suck at billiards (just ask Andy) but I'd buy this Obscura Cuelight pool table.

3% of women plan household chores during sex and other interesting (and mostly less depressing) facts.  Scientists have succeeded in measuring the shortest interval of time ever: 20 attoseconds (20 one-billionths of one-billionth of a second).  Unfortunately, this interval still vastly exceeds how long I can keep a woman interested.

You ever get a smiley while showering?  (not what you think)   Antimicrobial soap can damage your cucumber (but leave it sparkling clean!).

This is an MRI of my cucumber (really).  From Inside insides.
I almost ROFL when I got to #4 on this test from 1964 of my sex quotient.  (Note use of the word necessarily.)  Rolling back the clock further, here are tips for single ladies from 1938.  "Never look bored, even if you are."

No, I won't shave the baby.  But if that baby grew up, it would look like the father in this creepy German picture book.  I don't read German, but I think it's about the poor quality of ob/gyn services.  Look at the doctor - he doesn't do a damn thing.

Validation at last: you should blog even if you have no readers.

...because poverty is the one thing money can't buy.  --Diogenes
Posted by John at 6:21 PM