At every party there are two kinds of people...

This past Wednesday evening, driving home from getting my haircut, on a dark two-lane road, away from bright lights, I heard on the radio, for the first time, the music I want played at my funeral: Finnish composer Jean Sibelius' The Swan of Tuonela. Beautiful.  Haunting.  Dynamic.

How much more annoying can this blog be?  None.  None more annoying.
How much blacker can NASA's carbon nanotubes grown on titanium be?  None.  None more black.  The article explains why NASA needs black that goes to 11.  NASA uses something called the process communication model to categorize people into 6 personality types, one of which turns out to be the most successful for astronauts.  Are you a rebel, reactor, workaholic, promoter, dreamer, or persister?  NASA takes us on a tour of all known galaxies.

Biomedical engineers are projected to have an employment growth of 72 percent, must faster than average, and other nuggets about engineering employment between 2008 and 2018.
In the article "5 Business Killers", author Verne Harnish advocates that you stop doing things that suck the life out of your company.  #4 is "Don't answer your own email."  In this age of direct, genuine communication how can having an assistant answer your email be considered a net benefit?  Sure you save time by not having to perform the mechanical act of reading email but perhaps the issue is better managing your email.  Make sure people know what they should and shouldn't ask you and apply smart filters to remove junk and automatically sort the rest.  Then reply to your "real" email.  On the other hand, Harnish's #5 is "Stop eating alone."  Having lunch with employees and customers is a great way over time to develop your business. 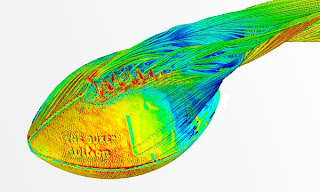 CFD simulations of a football's aerodynamics.
I like when two things I'm interested in intersect each other with cool results:
And now for the rest of the bulleted CAE links.
Social Media Examiner shares these 5 tips for managing your online reputation.  #2 is "Alert yourself and then Join the Conversation."  The recommendation involves creating online alerts (e.g. Google alerts) for your name, your company, your products, your competitors, etc. so you can monitor what's being said about you.  But don't forget the second half of the tip: join the conversation wherever your name is mentioned.  (Because I'm the poster boy for egomania, it probably doesn't surprise you that I already have alerts for my name, my company, etc.  But I did just take action and converted all those alerts from email to my Google Reader feed.)

This makes no sense.  Flame retardants found in butter. Don't you cook with butter?  Doesn't that mean it enhances cooking flames or something?

638 circles in 16 gifs
Simulation pays off during product design because "in the real world there's no undo" and other insights are available in The Economics of Design Simulation - Time, Money, and Quality.  While I have not yet read the full PDF (freely downloadable from the site), this is an insightful article about why over-engineering products is no longer a viable business strategy and how simulation can help you optimize your products for your customers' needs.  (Of course, the subtitle begs the maxim: "better, faster, cheaper - choose 2 of 3".)

In Cutting the Cord (to the computer mouse), Desktop Engineering engages in speculative thinking about the future of human-computer interaction in design and CAE.  These technologies are really cool and I hope that that someone's keeping ergonomics in mind.  I barely have the strength to remain seated and can't imagine having to stand, walk around, and wave my arms just to use my computer. 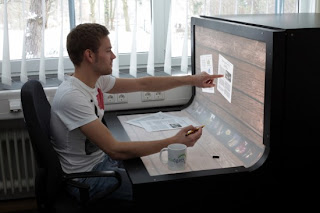 The Bend Desk
And speaking of HCI, here's a new computer display that I'm certain will end up on my son's "must have" list (just like the 60 inch curved display I posted a while back.)  The Bend Desk is a L-shaped touch screen that curves from a flat desktop up to a vertical display.

From the history of animation department, did you know Chuck Jones had to pitch How the Grinch Stole Christmas TV show 26 times before he got a sponsor?

I rarely agree with this newspaper columnist and in fact I'll disagree in a minute with something he wrote in this article, but it saddens me that I scored miserably on these 10 questions about U.S. history from a study guide for immigrants. (#9 Name the U.S. territories.)  I guess geography is a lost skill.  HOWEVER, later in this opinion piece the author mentions "the anti-immigration sentiment that seems to be sweeping the country."  Yes, there are fringe wackos who are "anti-immigration" but they are in the underwhelming minority.  It's "illegal immigration" that's the sticking point.  And don't bother trying to infer too much from my statements here: my wife and I are both second generation descendants of legal immigrants. 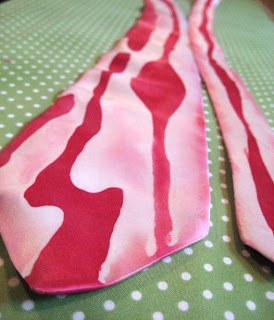 Another holiday gift idea: a bacon necktie.
Programmers: stop making these mistakes.  #9 is "Opening up too much to the user" and I found it timely because I was talking to someone at lunch yesterday about iOS versus Android where the latter was described as for more technical people.   Here they write "...placing the onus on users to customize functionality they do not fully understand can invite disaster..."  This jives with user interface advice from Cooper along the lines that "every decision you force the user to make is a failure of design."  (Sorry if I got that quote or attribution wrong - I'm doing it from memory.)

Business people: stop doing things that sap energy.  Instead of a "to do" list, make a "stop doing" list with stuff like providing service X or marketing using Y.  Art Petty has his favorite dumb ass management mistakes including #6, Letting marketing define its own key performance indicators.   If marketing activities don't relate to the measures that propel the business they're useless.

Results of the poll Why the Boss Sucks: 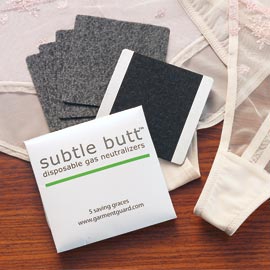 Like Depends but for farts: Subtle Butt
It's not too late to buy several packages of Subtle Butt Discreet Odor Neutralizers for holiday stocking stuffers.  I love the tag line: "Never be embarrassed by 'escaped' gas again."  Quoting "escaped" makes it seem like an inside joke - "Ha ha, we know it never really escapes like a prisoner tunneling out of Stalag 17.  You knowingly and willingly set it free."

Let the debate begin.  What's better for CFD: Finite volumes or finite elements?  I think this article mixes both meshing and solution algorithm issues rather than just focusing on the latter.  I still don't know the correct answer to whether FVM or FEM is better.

"One of the biggest challenges you'll face in your life is folding a fitted sheet."  Forgive the hyperbole, but learn the technique.

Here are answers to 10 common business blogging questions. #7 is "How much time per week should we allocate to maintaining the blog?" and the answer is 2-3 hours.  Got spare time for reading product management blogs?  Here's nearly 200 of them.

"The user's train of thought is sacred" is one of several tips for critiquing a user interface.  I find that tip similar to Cooper's (wow - referenced him twice today) on making the interface match the user's mental model of the task.  Another good tip in this article is "the best interfaces are incrementally learnable." 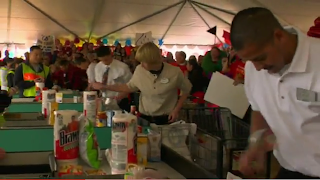 Ready Set Bag!
My son was a sacker and checker at the local grocery store so I'm certain he'll be interested in the National Grocers Association 2010 Best Bagger Championship.

iPhone passes Blackberry and Android may do the same soon.  Google is Chrome, Chrome, Chrome: Browser, OS, web store, etc.  Google's Zeitgeist shows what we searched for in 2010.  Computer tech support people have this acronym PEBKAC which stands for Problem Exists Between Keyboard and Chair.  These stories on the successful software blog illustrate why this acronym exists.

How badly do I sex thee?  Let me quote the way (from Rowan Somerville's The Shape of Her, winner of the Bad Sex in Fiction Award).


“Like a lepidopterist mounting a tough-skinned insect with a too blunt pin he screwed himself into her.”

Drumroll please...  The nominees for the Best Animated Short Film Oscar are.... 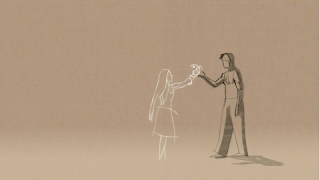 The 3-minute animated film Thought of You is a beautiful example of figure drawing and movement.  It's amazing how line drawing can convey realistic weight and balance while retaining the fluidity and fantasy that is animation.
This graphic of every gaming console brings back memories of the Super NES and Super Mario World.  What will be the top words of 2011?  Parseltongue supposedly will be one.  Yippee.  Girl Talk's All Day is an hour-long mashup that's pretty good but has some lyrics that are definitely NSFW.   The manifold clock connects the two hands so that time is displayed in 3D.  I'm not certain what limits it to eggs, but the online Egg Timer should come in handy.  The Noun Project collects and organizes the symbols comprising the world's visual language.  They're free for you to download.

...those who want to go home and those who don't.  The trouble is, they are usually married to each other.  ~Ann Landers

[All characters appearing in this work are fictitious. Any resemblance to real persons, living or dead, is purely coincidental.]
Posted by John at 4:02 PM