I gots lots of readin' to do.

I'm starting off 2014 with quite a backlog of books. And this doesn't even count the audiobooks I'll get from the library. Better get started. 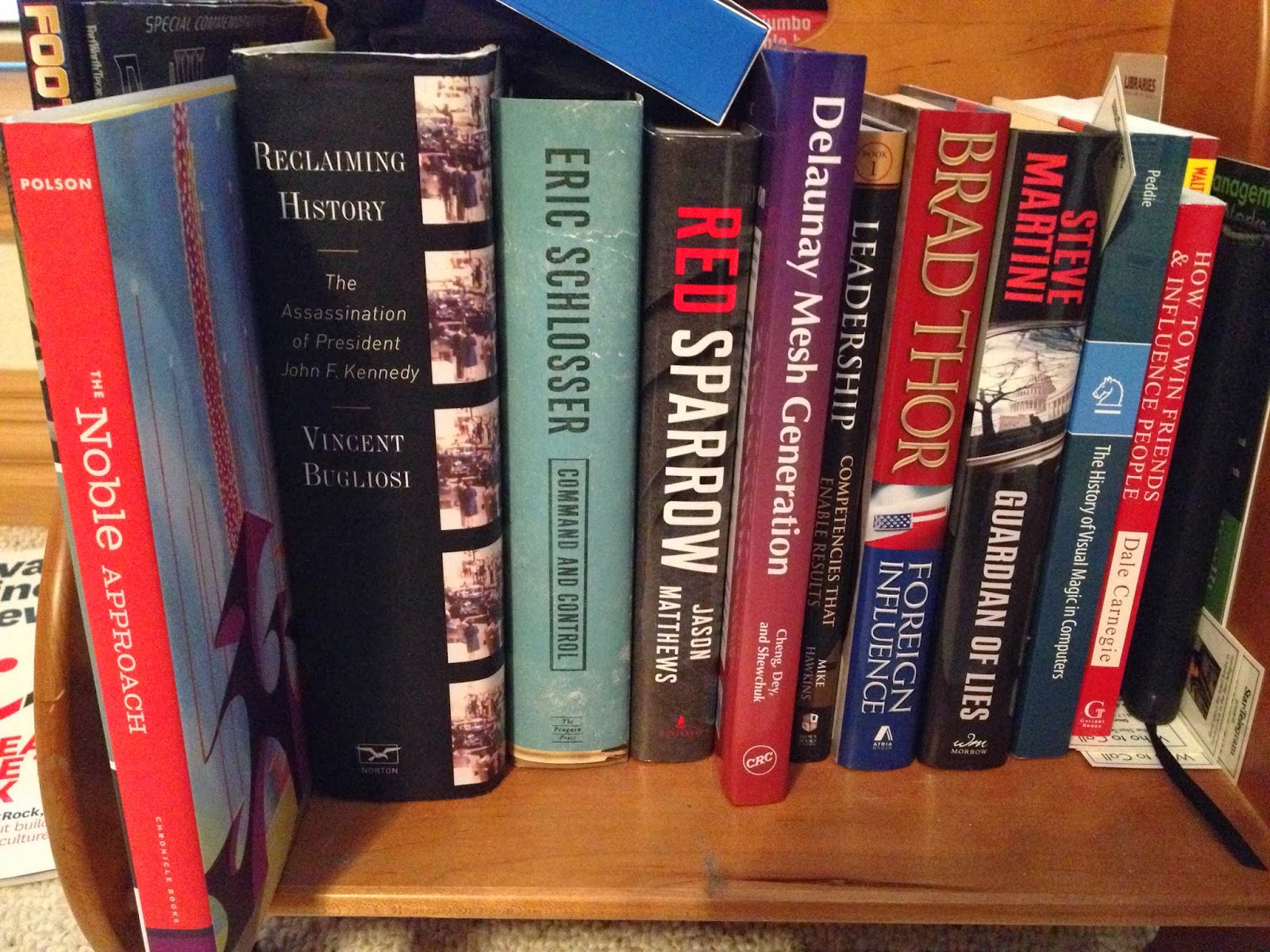 The exhibition Mark Rothko: The Decisive Decade 1940-1950 made its closest approach to DFW by landing at the Arkansas Art Center in Little Rock. So a friend and I hopped in a car and drove 5-hours up and 5-hours back in order to see paintings from the decade during which Rothko's style transitioned from surrealist figuration to the rectangle-based abstraction by which he is most widely known.

The highpoint of the exhibition for both me and my friend was Untitled, 1949 representing the transition's completion and rightfully placed in the exhibit's final gallery.

From across the room, its brilliant, luminous colors draw you in. But when you stand within 18 inches of it - as Rothko wanted you to do - every brush stroke of the large central area sparkles deep blue and the entire dark region warmly embraces you. At the same time your eyes play vertically over the spectrum of colors from white to yellow, orange, red, blue, black, and green. The soft edge work between the colored regions lightens the overall effect. It's a giddy sensation that made me smile.

I commented on the exhibition catalog this past June. While in Little Rock I was able to purchase a copy of the catalog signed by Rothko's son, Christopher Rothko, who wrote one of its essays.

Nothing is more difficult, and therefore more precious,...

Settle back for a full hour of the Allan Holdsworth Trio recorded live at Leverkusen in 2010. (Thanks Walker.)

In honor of Brian Eno's Grammy nomination for Lux, here's the website for his Day of Light archive. This was a live streaming of the album coupled with listener submitted photos themed around "play of light."

Naked Truth, one of my current music infatuations, has a new website (and hopefully an new album in 2014). The site offers videos and streaming music so check it out.

Call it a youthful indulgence, but here's a 1975 live recording of Do You Feel Like We Do.

You can listen to Frame by Frame from the upcoming Live in Tokyo album from The Crimson Projekct.

Creepy. An artist makes 3D prints of a person's face based on DNA she collects from discarded objects like chewing gum and cigarette butts.

Or maybe you'll like this little paradox: galaxy NGC 1277 is only 230 million light years away but all its stars were formed at the same time - about 10-12 billion years ago.

What's displayed on computer screens in films is often laughable. There's always some overly graphical percent complete countdown with huge fonts and swirling animation and flashing red text at the end. But often the computer programming that appears onscreen is real. For examples, see source code in TV and films.

Fort Worth people: did you know you can wear your Tex-Mex pride with a t-shirt from Benito's?

Things not to say when giving a speech or presentation. #5 Can you read this? Or my favorite variation, "This is probably too small or illegible for you to read but..." Instead of what not to do, speaking.io presents a complete game plan of things to do for public speaking.

Colorizing historical photographs does absolutely nothing for me except for the tiny part that thinks it's wrong.

The Academy Award nominations for animated feature and short are in and I've seen precisely zero. From what I've read online, The Wind Rises and Get a Horse! are favorites.

Here's a perfectly sad example of heavy handed service from our friends at the federal government. In this episode, the Customs service "mistakes" a virtuoso's hand-made flutes for agricultural bamboo and has them destroyed. I bet these same idiots would mistake a Stradivarius for a ukelele.

And while we're on the topic, a judge has ruled strongly in favor of the plaintiff in the case of a person who was mistakenly added to the no-fly list.

Just a little WWII story about a P-51 ace who flew under the Eiffel Tower in pursuit of the enemy. And just a little video of an F-14 flyby at dusk with full afterburner.

Good news. The Spirit of Washington, the B-2 that crashed a couple years ago on Guam has been repaired and returned to service.

OK, just one more. A trip down memory lane when the idea of supersonic transport aircraft was all the rage.

"Several mammalian species spontaneously align their body axis with respect to the Earth’s magnetic field (MF) lines in diverse behavioral contexts." Allow Mr. Science to translate that for you: dogs align themselves with the earth's north-south axis while pooping.

This list of manners all kids should learn by age 9 might just as accurately be titled Things Most Adults Still Don't Understand. #12 A hand written thank you note can have a powerful effect.

Beer has always been an integral part of college life so this makes sense. You can now earn an Associate in Applied Science of Brewing at Blue Ridge Community College.

Or teach yourself a little Computer Vision with these online notes from a course at Cornell.

I'm sorry, but The Brothers Karamazov does not belong on a list of must-read philosophy books.

Ever wonder who would play you in your life's movie? Sigh. Ben Affleck.

Learn the lingo of winter. So far this year I've learned cobblestone ice and now frostquake.

I feel good about not yet having bought a Blu-ray player now that they're predicted to be dead in 5 years. One other thing on this list of doomed tech products surprised me.

Can a personality quiz guess your politics? It says I'm 78% conservative, 22% liberal. You judge whether that's accurate or not.

One more: how long will your survive after the apocalypse? For me, 5 years.

For Russians visiting the U.S.A: "Women play a greater role in business. Often they insist to be treated exactly as an equal and not as a lady." They insist! Egad!

Apparently, Meryl Streep thinks a Disney ate her baby. If you heard or heard of Ms. Streep's anti-Disney rant at a recent awards ceremony you should know that she has virtually no clue what she's talking about.

I just want to know why this fart captured with FLIR imaging this has the Travel Channel's branding.

...than to be able to decide. ~Napoleon Bonaparte
Posted by John at 4:32 PM 4 comments:

Leave your sons well instructed rather than rich...

The wheels on the bus go round and round.


...for the hopes of the instructed are better than the wealth of the ignorant. ~Epictetus
Posted by John at 10:30 AM No comments:

The two most engaging powers of an author are...

Happy New Year. Take 2 minutes for this nice video of downtown Fort Worth at the stroke of midnight.

8 ways to keep your employees happy dives into the morass of generational branding. "Millennials, in particular, want to feel like their work is making a difference..." Well, aren't we special. I suppose that most everyone else is happy sitting in the dark banging two rocks together.

Years of hard work go into earning a graduate degree. Yet your thesis or dissertation can be reduced to a single sentence: LOL My Thesis.

“Our modern age is characterized by a sadness which calls for a new kind of prophet. Not the prophets of old who reminded people that they were going to die, but someone who will remind them that they are not dead yet.” If this strikes the slightest chord with you, read more from Do It: 20 Years of Famous Artists' Irreverent Instructions for Art Anyone Can Make.

Science reveals the many reasons why it's extremely difficult to castrate a hippo.

Science is giving you plenty of time to plan ahead for the total solar eclipse of 21 August 2017. It even has its own website.

Face palm. One third of U.S. adults don't accept evolution as scientific fact and instead delude themselves into believing that "humans and other living things have existed in their present form since the beginning of time."

A new batch of IBM's 5 in 5 (5 things that will change our lives in 5 years) is here.
In The Widening Gap Between High School and College Math we see illuminated three problems with high school math instruction.
And the happiest college in the country is... Texas A&M.

Have you ever thought about how mazes are designed?

Be aware when dining out - new IRS rules means restaurants can't automatically add a gratuity to your check.

Who are the worst NFL TV announcers? I don't know about the worst, but I always liked Mike Patrick.

If you already know what "the day the eagle shits" means, you don't need this booklet of military slang.