What time is it? Ask the Human Clock.

David Torn keeps appearing in my music listening ouevre, most recently in the form of Sun of Goldfinger, a trio with Tim Berne and Ches Smith. Here's the album teaser. You can buy the album on Bandcamp.

How about the teaser for Chat Noir's Hyperuranion.

And here's a live solo performance on piano by Jamie Saft.

One last one is Mark Wingfield's Tales from the Dreaming City.

Let's go on a video tour of each element on the periodic table.

And while I'm revisiting favorite themes, here's an animated map of U.S. population density over time.

Another map? How about this one of political prejudice by U.S. county. Unfortunately, the DFW metroplex seems to be pretty damned prejudiced.

Speaking of Rothko, Houston's Rothko Chapel will be closed for renovations until mid-December. I look forward to seeing the chapel's paintings in a new light, literally and figuratively.

Poignant is the word I'd use to describe hearing Mark Rothko's son read his father's letter to Lee Krasner on the death of Jackson Pollock.

Advice from painter Willem de Kooning includes "seek out glimpses of inspiration in the world around you."

I don't know what to make of the fact that the 76104 zip code (home of my favorite company) has the lowest life expectancy in the state of Texas.

I'm glad that Bill Gates chose to include on his list of 10 breakthrough technologies for 2019 "new-wave nuclear power."

The tiny archeologist in me (I wanted to be one in high school) loves discoveries like this untouched Mayan cave.

This article from The Aviationist, one of my favorite blogs, was the first I heard that the USAF is thinking about a fighter to replace the F-22 called NGAD, Next Generation Air Dominance. I just hope they build more than 187 of them.

If you want to live longer, check out what works and what doesn't.

In case you didn't hear, Star Wars: Galaxy's Edge (aka Star Wars Land) at Disney World and Disneyland in August and May, respectively.

The warty comb jelly (great name for a band) creates an anus each time it has to poop and makes it go away after wiping (i.e. transient anus - an even better band name).

I always say I should read more science fiction so the 2018 Locus Recommended Reading List will come in handy. Now if only my library's cloud app had any of these titles.

Your only job is to get in touch with it. ~Wilfred Bion
Posted by John at 9:08 AM No comments:

We are kept from our goal not by obstacles...

If you're a fan (or even familiar with) business author Tom Peters, you might want to check out his latest slide deck based on his book The Excellence Dividend. Here's Putting People (REALLY) First that makes the case for making any organization of any size a great place to work.

Here's the trailer for the movie APOLLO 11. This might actually get me into a theater.

Take 2 hours and 40 minutes to watch the Titanic sink in real time.

If you're not following Neill Blomkamp's work at Oats Studios you're missing some fantastic stuff. And watch all of it, not just the Anthem trailer.

As a boss at work, when you give guidance do you deliver ruinous empathy, manipulative insincerity, obnoxious aggression, or radical candor (video, book)?

Wow. Who could've seen this coming? Google fined 50 million euros by France for GDPR violations. (I say that not because I think Google is in violation but because somebody was bound to fine the big guys shortly after the law went into effect.)

When animator Clair Weeks left Disney in 1952 his "goodbye book" was filled with drawings, autographs, and notes from everyone. Check it out.

I've extolled Stephan Thelen's Fractal Guitar album but why not hear about it from All About Jazz.

The Red Bull Air Race is only scheduled to come to the U.S. once in 2019: Indianapolis in October.


Do you know the difference between a shitshow and a clusterfuck?

And I could read this visual history of the periodic table all day.

Science proves that not all poop is equal.

And prepare to waste hours and hours with Idle Breakout. 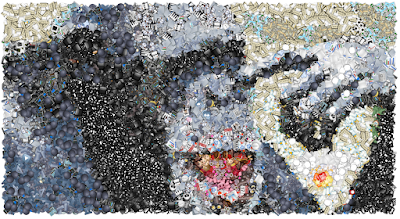 And I leave you with the ability to turn any image into a mosaic of emojis.