The Counterfeit Agent by Alex Berenson

Only John Wells knows
who's trying to start a war.
We wait for part 2.

I like Alex Berenson's series of books centered around CIA operative John Wells including the first part of his latest, The Counterfeit Agent.

My problem is with the ending. The book closed with absolutely nothing resolved. Nothing. We're not talking cliffhanger here. We're talking simple dead stop.

To me it smells like Berenson's publisher took a long book and simply split it into two.

This wouldn't be so bad except that it's his latest book meaning I can't even go to the library and start reading part 2 immediately.

Stick Men's Supercollider is the place for those new to this trio to start listening. The Stick Men are Tony Levin (Chapman Stick), Markus Reuter (Touch Guitar), and Pat Mastelotto (percussion). If you recognize those names from their other bands and solo work that alone should be enough for you to buy this album.

Disc 1 of this 2-disc set is best-of collection from their previous albums. Because I already have all those albums, Disc 2 was my sweet surprise because it consists entirely of live improvisations from the band's 2013 tour for the DEEP album. It's simply mind boggling what these guys can play.

Here's a video that gives you a taste of their sound.


Stick Men's website is http://www.iapetus-media.com/stick-men/ where you can find 3 more videos.

I received no compensation of any kind for this review.
Posted by John at 2:51 PM No comments:

This blog is on hiatus, on hold, suspended, taking a vacation, going on walk-about, enjoying a holiday until mid-November due to life in meat-space's propensity for getting in the way of life in cyber-space's self flagellation.

Tired and wired, if that's even possible.
Posted by John at 10:00 AM No comments:

What more can you say
about music other than
it's enjoyable?

Brothers and acclaimed musicians Tony (bass) and Pete (piano) Levin have created an album of original, classic, cool jazz. The self-titled Levin Brothers recording can best be described as sweet, nice, and thoroughly enjoyable. There's an underscore of emotional vibrance between the two main performers.

Standout tunes for me are Cello in the Night, a luxuriously flowing ballad with a hint of Oscar Peterson and a down-tempo redux of King Crimson's Matte Kudasai with beautifully phrased bass taking the lead.

Here's a taste of their work, the bouncy Not So Square Dance. You can also hear other audio samples here.

You can find more about the Levin brothers at their website, www.thelevinbrothers.com. 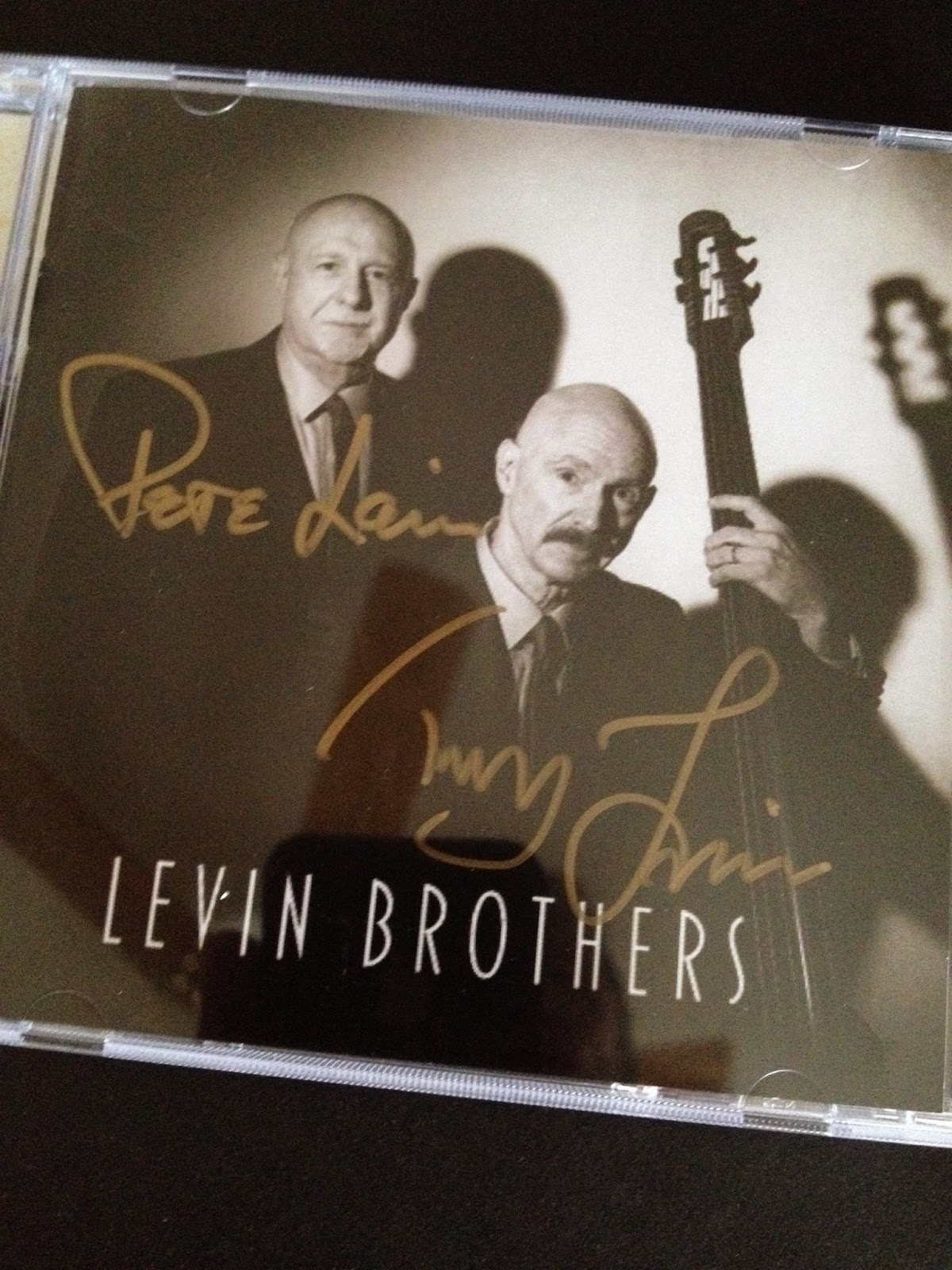 Updated 14 Oct 2014 to correct replace the word cello with bass, an error caused by thinking about one song while writing about another.

Burnt Relief, the duo of Colin Edwin and Jon Durant, have a new album called Etymology due for release soon. You can pre-order at the previous link and listen to the sample track, Precis, here.

If you yawn when you hear the phrase "string quartet" and think dusty old farty music, think again. The Kronos Quartet plays modern, classic, fresh works. If nothing else, watch the video for the visual effects. (See there website at www.kronosquartet.org.)

One of my favorite painters, Callum Innes, was a nominee for the 1995 Turner Prize. This year's candidates don't include a single painter - video, photo, and other arts are represented.

"Teaching biology without evolution would be like teaching chemistry without molecules, or physics without mass and energy." A college biology professor has The Talk with his students.

A photo gallery of Betta fish.

Another Xmas gift idea for those with $5,000 to spare: a human skull carved from glass scavenged from the Manhattan Project's Hanford site where uranium was enriched. (Note: $5,000 for an object that's around 1.5 inches cubed.)

A blog about Fort Worth: Hometown by Handlebar.

I only recently learned what the word "polymath" means but I would definitely say it applies to this post from Ribbon Farm on flow-pacing as it includes fluid dynamics, music, and software updating among other things.

Cave paintings recently discovered in Indonesia are 40,000 years old and challenge the Euro-centric viewpoint of the development of art.

Secret rules for Disney employees? I don't think some of these are all that secret like the fact that characters signing autographs are all trained to do them identically. Not being allowed to say "I don't know" is an interesting one.

Can you tell the difference between a line of Hemingway and a line from a children's book? (I only got 8 of 15 correct.)

The guys from the classic Genesis lineup got together for their new documentary's premiere and were all smiles. But Steve Hackett doesn't like it. And speaking of Genesis, Rolling Stone lists several of their songs that only "hardcore" fans know. I must not be hardcore enough because I'm not sure I'd call some of these "insanely great."

Pink Floyd's new album, The Endless River, is coming in November and here's the trailer and the track Louder Than Words.

Check out the well-being indices where you live.

...have thorns about them. ~Henry David Thoreau
Posted by John at 9:31 AM No comments:

The King's Deception by Steve Berry

A Yank named Cotton
must solve an English riddle
before someone dies.

Steve Berry's The King's Deception is his 8th centered on the protagonist Cotton Malone, a retired (?) Justice Dept. agent. In this installment he's stuck inside a deadly riddle: what if one of the British monarchs wasn't who everyone thought they were?

This was a solid and enjoyable story but my lack of historical knowledge (my fault) left me frustrated with the litany of enumerated Georges and Henrys and Elizabeths and so on. After a certain point, tales of Henry the Xth's sister-in-law or whomever just became a swirling sea of names.

For two years two months
Henry lived in solitude
with insights for all.

Finally after 3 airplane trips I finished Henry David Thoreau's Walden. As you can see from the link on the left, I read the free version on my Kindle.

I wouldn't have written a blog post except for one lengthy quote from the book that I'll cite here.

"No man with a genius for legislation has appeared in America. They are rare in the history of the world. There are orators, politicians, and eloquent men, by the thousand; but the speaker has not yet opened his mouth to speak who is capable of settling the much-vexed questions of the day. We love eloquence for its own sake, and not for any truth which it may utter, or any heroism it may inspire. Our legislators have not yet learned the comparative value of free-trade and of freedom, of union, and of rectitude, to a nation. They have no genius or talent for comparatively humble questions of taxation and finance, commerce and manufacturers and agriculture. If we were left solely to the wordy wit of legislators in Congress for our guidance, uncorrected by the seasonable experience and the effectual complaints of the people, American would not long retain her rank among the nations."

The more things change, the more they stay the same.
Posted by John at 1:33 PM No comments: