When I look back at my 2016 reading and remove the business and art books, several noteworthy fiction novels remain. In retrospect, it's clear that I got back into Tom Clancy big-time, both re-reading his older works and some of the new ones where his name is in the title. He created characters that still interest me.

Red Sparrow by Jason Matthews was a really good spy thriller involving our Russian friends. The second novel in this series (Palace of Treason) is on my to-read list and the third (The Kremlin's Candidate) is already being teased. Highly recommend. Here's what I wrote about Red Sparrow shortly after finishing it.

I've said this before, but I probably don't read enough science fiction. Neal Stephenson's Seveneves proved that yet again. He presents a fresh but plausible apocalyptic scenario and plays it out in detail to the fullest (how else to explain a plot line that spans millennia). Satisfaction comes from "being in" the plot as I found myself agreeing with how things were progressing while also having my curiosity piqued by wondering if some of the future scenarios might play out like they did. Highly recommend. Here's his website.

What I didn't read is almost as interesting as what I did. City of Mirrors, the 3rd novel in Justin Cronin's Passage trilogy was published but still hasn't found its way onto my to-read list. Loved the first two novels in this post-apocalyptic series so I must finish it. Here's Cronin's website for the trilogy.

But before I start adding to my to-read list, I really need to finish the books I already have. 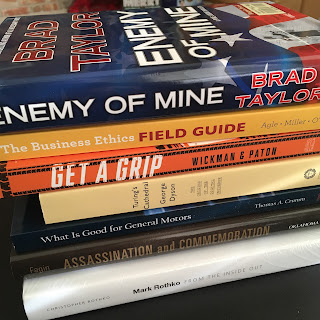 When I look back at 2016's new (to me) music, I see a lot of ambient soundscapes. I can't say whether that correlates to anything going on in real life (did I really need that much relaxation?). But I can say that a few of those albums resonated with me more than the others. Keeping in mind that this is not a "best of" list, my favorite music of 2016 in no particular order is:

The year started out on a musical high point for me with J. Peter Schwalm's The Beauty of Disaster.  At the time, I wrote about the music's balance of tension and hope. Musically subtle, emotionally rich, Disaster continues to reveal new depth with each listen. More of my thoughts on then album can be read here.


The Beauty of Disaster is available from Rare Noise Records. Schwalm can be found on Bandcamp, Soundcloud, Twitter, and Facebook.

Bernocchi wrote online "I have found so much beauty in the dark, as I have found a lot of horrors in the light." Rather than shining a musical light on a sense of place, Bernocchi and collaborator Shinkiro turn down the lights with In Praise of Shadows. The resulting dark ambiance is exquisitely beautiful. More of my thoughts on Shadows are here.


Bernocchi can be found online on Twitter, and at his website where the album can be ordered.

Pat Mastelotto and Markus Reuter record together under the name TUNER and their album ZWAR (Live in Europe 2005) is worth it just to hear their version of King Crimson's Industry. This duo packs progressive rock into performances that are part intricacy, part amazement, and part joy.

You can stream some ZWAR tracks and learn more about TUNER on Bandcamp.

When the latest incarnation of King Crimson started touring, I prayed a live album would result. 2015's Live at the Orpheum didn't fully answer my prayers. This year's 3-CD, protractedly-titled Radical Action to Unseat the Hold of the Monkey Mind hit the sweet spot. This is everything I want from a King Crimson live album: impeccable performances, rarely heard tunes, and broad coverage of studio albums.


You can order Radical Action from Burning Shed and read more about King Crimson at DGM Live.

Burnt Belief is the duo of Colin Edwin (bass) and Jon Durant (guitar) and Emergent is their second album together. To my ear, everything here is just below the surface where Edwin's and Durant's performances percolate just below Latin-tinged progressive jazz melody.


You can learn more about Emergent at Alchemy Records. Edwin may be found at his blog and Twitter. Durant is online at his website.

If the EP is a worthy barometer, Gaudi's forthcoming album, Magnetic, will be tremendous. He's plundering bits from Rare Noise's entire multi-genre catalog and blending them into something new.

The EP is and the album will be available from Rare Noise Records. Gaudi is on Twitter.

I listened to a lot of ambient in 2016 and 2017 will start the same way. I've already pre-ordered and am awaiting delivery of Brian Eno's latest ambient work, Reflection.

"I don't know much about music, but I sure like the way it sounds."

If you asked me for my new year resolution...

Today's soundtrack begins with Space is the Place, a live recording by Markus Reuter and Tim Motzer.

The annual list of banished words from Lake Superior State University includes "on fleek" and I have no problem with that. Or how about the word warrior's list of words that should be brought back into popular use such as "rumpus."

What makes an abstract expressionist painting good? You do, to a large degree.

Actually, it's not all of you: just your brain. We can easily decide whether a painting was skillfully executed and beautiful. But abstraction requires us to think really hard about the third prerequisite: is it interesting? A Nobel-winning expert on human memory explains why abstract art gives us a good kind of brain ache.

Mark Rothko is not an action painter.

When the aural becomes visual: a musical score as geometric abstraction.

Maybe there are only 4 personality types: Envious (gotta be better than everyone else), Optimists (you and a partner will always make the best choice), Pessimists (make choices as the lesser of two evils), and the Trusting (will always cooperate regardless of win or lose).

Vintage photos of B-17s in flight.

Science solves a mystery: the weird sound deep in the Mariana's Trench is a new type of baleen whale.

Science proved that "empty space really isn't empty" and polarizes light traveling through a vacuum, something called vacuum birefringence (i.e. light is interacting with a vacuum).

And now science has measured how antimatter absorbs light.

Keep up with which animated film wins which award using Cartoon Brew's award tracker. Kubo and the Two Strings and Zootopia appear to be doing well.

If nature is more your thing, here are National Geographics' photo contest winners. I personally like most the 1st place winner for landscape.

A flight from NY to Paris had to make a pit stop in Ireland cuz passengers had to go. Bad.

...it would be to find out who I am. ~Cyril Cusack

To show resentment at a reproach...

Steve Hackett's next album, The Night Siren, is due for release in March 2017.

If Gaudi's EP (available from Rare Noise Records) of next year's Magnetic is an accurate preview, it's gonna be a tremendous album.

Science giveth and science taketh away. The observation of gravity waves from the collision of two black holes may also show where relativity doesn't apply.

Pantone's color of the year for 2017 is greenery, "a fresh and zesty yellow-green shade that evokes the first days of spring when nature’s greens revive, restore and renew."

Take an hour and listen to Edward Tufte's thoughts on data, analysis, and truth. From a talk at Microsoft earlier in 2016.

The U.S. Air Force is restoring the famous B-17, Memphis Belle.

There are 27 entries for the best animated feature Oscar with Zootopia the favorite.

A museum of hammers.

Social media and content marketing predictions for 2017: live video, mobile, the fall of Twitter (?), augmented reality, and more. Or you can look back at lessons learned in social media usage from 2016: customer experience has passed brand health as the top goal.

This brief video illustrating the history of Disney animation shows me there's a visual richness to hand drawn and hand painted animation that you can't quite get yet with computer animation.

...is to acknowledge that one may have deserved it. ~Tacitus
Posted by John at 8:49 AM No comments:

Sadly, it was only upon her passing that I learned of Pauline Oliveros and her music. Give a deep listen to Deep Listening.

Brand X has reunited and is touring. You should try to see them when they come to your town. Here's a taste of what you'll see and hear: Nuclear Burn.

Edward Tufte is looking for and examining "sentences off the grid."

Director Brad Bird shares some of his insight on animated films. First, animation isn't a genre. Second, animation is about how things feel not how things are. (Sound familiar? Think abstract art; how does it make you feel, not what is it.)

Yes, this is a thing - the online encyclopedia of integer sequences. For example, cubes whose largest decimal digit is 3.

Lots of maps today. Purely coincidence. Starting with this map of migrations.

Promising research on Type 1 diabetes results in pancreatic islet cells that can be transplanted into the patient's liver (or other organ) resulting in no further need for insulin injections.

The case for nuclear power.

This past week was the anniversary of painter Clyfford Still's birth in 1904. One of his ten quotes published by his namesake museum in celebration of the anniversary is "space and figure in my canvases had been resolved into a total psychic entity."

The CIA recently declassified a large number of historic maps.

It's a map and it's science. Take 8 minutes for this video presentation of the Map of Physics.

How to spot the International Space Station.

If you only listen to one mashup all year, make it this one: DJ Earworm's United State of Pop 2016.

You should buy this if only for the name, but cheese is a bonus: the Fondoodler, a hot glue gun filled with cheese.