I gotta admit that I went a bit overboard on music this year with 58 albums purchased. That's a lot for me. But in my own defense, a bunch came from RareNoise's "leap of faith" (buy up-front all their releases for the year and pay no shipping) and another bunch came from buying David Kollar's entire Bandcamp catalog with a sweet "black Friday" deal. And you'll notice in the write-ups below, these albums each led to purchases of related albums.

I wrote few album commentaries throughout the year simply due to time constraints. And even this list will lack explicit justification for my choices. I recommend you click through to each album's page to stream a sample because I am not good at describing the music versus sharing my reactions to it.

Choosing favorites from such a big (for me) list was difficult but here it is. 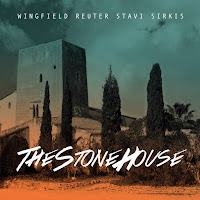 The Stone House by the quartet of Mark Wingfield, Markus Reuter, Yaron Stavi, and Asaf Sirkis was completely improvised and recorded live without overdubs in a single day. And the result is a complex, progressive, instrumental performance that's astonishing for how composed yet relaxed it feels. It was followed later in the year by Lighthouse from the same sessions and a third album is promised. "Wow" came out of my mouth before the first track on Lighthouse had finished. The Stone House and Lighthouse are both available from MoonJune's Bandcamp page. 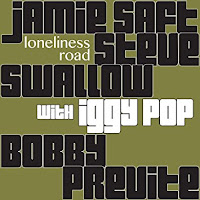 I will admit right up front that I came into this album a bit biased because I'm not really a fan of Iggy Pop's prior work. Bias aside, this is a damn beautiful performance by a jazz trio (piano, bass, drums) with three of the tracks featuring Iggy Pop's vocals that, upon repeated listens, provide a gravely, emotive contrast. Loneliness Road is available from RareNoise.

After Loneliness Road I developed an insatiable appetite for Saft's work and bought The New Standard (again with Swallow and Previte) and two albums by Saft's New Zion Trio: Fight Against Babylon and Sunshine Seas, the latter featuring Brazilian percussionist Cyro Baptista. 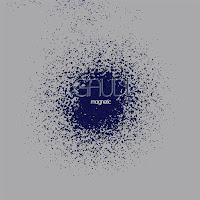 I really enjoy a lot of the music coming from the RareNoise label. So when it was announced that Gaudi's new album would use sounds from the entire RareNoise catalog as his "orchestra of musicians" combined, augemented, and enhanced with new performances by a broad cast of musicians, I was sold.

Magnetic did not dissapoint. It's like a party with all your friends with their best work on display but with intersting bits highlighted that you may not have noticed before and then want to go rediscover.

Notes from the Underground by David Kollar 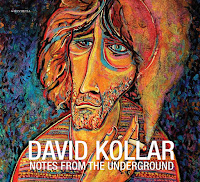 I was first introduced to guitarist David Kollar through the album KOMARA from the trio of Kollar, Pat Mastelotto (drums), and Paolo Raineri (trumpet) that I praised back in 2015. This year, Kollar released Notes from the Underground.

Kollar performs on guitar, synth, and treatments and is accompanied by Raineri on trumpet. The result is a bittersweet hopefulness.

I was so impressed by Notes from the Underground that I purchase his entire catalog of music that I'm still trying to sort through. 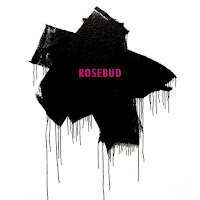 The first thing that popped into my head upon learning that Eraldo Bernocchi's next album (with drummer FM Einheit and cellist Jo Quail) would be called Rosebud, was to try to draw some analogy with the movie Citizen Kane. Then there's the cover art with (what I see as a) roughly painted black star with the word Rosebud neatly nested inside.  But I digress.

While I'm reluctant to label this music, the best I can come up with is industrial ambience. The performances balance the infinite with the immediate, tragedy and beauty, rigor and fragility.


My list of all 2017's listening is available for the curious. And regarding my musical tastes, just remember what I say: "I don't know much about music, but I sure like the sound it makes."
Posted by John at 8:55 AM No comments:

It's time for the post that no one asked for but gets anyway - the list of books I enjoyed the most from all my reading during 2017.

Mark Rothko: From the Inside Out

Christopher Rothko's book about his father, Mark Rothko: From the Inside Out, is neither a biography nor an art book. Instead, it's a series of insightful essays on various aspects of his father's work from someone with an up-close vantage point combined with perhaps the person most familiar with the artist's entire body of work. It may be my favorite book about Rothko and that includes Rothko's own The Artist's Reality.

Here's a sneak peek at the book from Yale Art Books.

Watching The Shining in the theater ended, for a couple of decades at least, my interaction with Stephen King. I am definitely not a fan of the horror genre. However, my interest in JFK's assassination (see here) was enough for me to give King's 11/22/63 a try. If you had a time machine, would you go back and prevent JFK's assassination? So you've got sci-fi and historical fiction. But you know what? This novel is a great love story. The fact that a lot of it is set in the DFW area doesn't hurt.

You can read more at stephenking.com.

Gregory Benford's The Berlin Project was one of the few books I took the time to write about immediately after reading which you should infer is a measure of how much I enjoyed it. Combining alternate history and nuclear weapons, The Berlin Project supposes the U.S. had an atomic bomb in 1944 instead of 1945 and asks how that might've changed the fate of WWII. That plot is compelling enough on its surface, but Benford draws from actually family insider experiences during the war to craft something enjoyable and realistic.

Here's the publisher's web page for the book.

Lest you think I found no favorites among non-fiction titles, Dianne Vaughn's The Challenger Launch Decision introduced me to the term "normalization of deviance" in its thoroughly engaging look into the organizational psychology of NASA and its contractors that led to the Challenger disaster.

Complexity: The Emerging Science on the Edge of Order and Chaos by M. Mitchell Waldrop

Get a Grip by Geno Wickman

We are made wise not by the recollection of our past...

Finalists for the Academy Award for Animated Short have been announced. Garden Party looks like my favorite; beautifully animated and funny.

I'm a huge fan of RareNoise Records and hope you'll become one after listening to their RecentNoiz playlist on Soundcloud which is kinda like a "best of" recent releases.

As I say every year, if you listen to only one mashup make it DJ Earworm's United State of Pop 2017.

Squatty Potty does it again.

When did life first appear on earth? Probably at least 3.5 billion years ago.

Thelonious Monk wrote 25 tips for musicians including "What you don't play can be more important than what you do play."

The Washington Post ranked the top 10 chain restaurants. Last with a grade of F is a place I've frequented (too) often. Olive Garden comes in at #4 with a C (but I'm addicted to their salad and breadsticks). #1 may surprise you but when I thought about it I had to agree.

Have any of my Boston friends visited the International Museum of World War II?

It's the time of year for predictions. Here's Fortune's predictions for 2018 for business. India gonna grow.

Vistage, of which I am a member, shares their trends for 2018 and beyond in four areas: politics (gerrymandering may - will likely, IMO - be found unconstitutional), economics (overall  positive except Brexit's impacts), tech (machine learning - I need to learn what that is - and then later 5G), and sociology (healthcare at a tipping point?).

...but by the responsibility for our future. ~George Bernard Shaw
Posted by John at 5:30 PM No comments:

Try not to become a man of success...

A little late on this one but Lockheed Martin in Fort Worth (aka Air Force Plant 4) celebrated the plant's 75th anniversary. Watch the video to see some of what's been accomplished there.

Running may or may not help the heart. A clickbait title with weak science behind it.

But riding a roller coaster can help you pass a kidney stone.

Michael Hayden isn't a fan of Trump. "If this is who we are, I wasted 40 years of my life."

News flash: you have to take responsibility for the assholes in your life. So says a Stanford professor and author.

Black Holes - an animated short about a Mars-bound astronaut teamed with a sentient melon. Probably NSFW.

Blast from my childhood past: the movie Paddle to the Sea.

The art of asking questions, an HBR video. Clarifying, adjoining, funneling, and elevating.

I leave you with bacon sizzling.

...but rather a man of value. ~Albert Einstein
Posted by John at 9:32 AM No comments: