When the past no longer illuminates the future...

Careful. You can get lost for hours in Every Noise at Once. More music genres than you every knew existed are arrayed on the screen and a single click gives you a brief sound sample so you can hear the subtle difference between experimental dubstep and future garage, between black sludge and crossover thrash.

The museum of endangered sounds.

I've heard a lot of bizarre music in my time but Maryanne Amacher's work may be the most... something.

Here are five pretty reasonable ways that the Soviets could have won the Cold War. And if you think the 1970s was only regrettable for its fashions, read on.

Take 50 seconds for a video on the Elements of Design.

Science: The Quest for Symmetry. tl;dr

What is there to say about a painting of a black square? Apparently quite a bit.


Can the internet keep you calm? Here at 10 website that try.

Google's hosting over 800 vintage photos from inside the Hanna Barbara studios.

There's Airbnb for finding yourself a place to stay. So why not AirWC for a place to poop?

The damage is done.
Shadow Sun Earthbound Starblind
I'm tied to someone.

I started writing that I had no idea how I went so long without even knowing that Sylvian and Fripp's Damage existed. But then I realized that's a stupid thing to say. Of course there are innumerable albums that I'm not aware of.

Anyway, thanks to Trey Gunn for posting on Facebook something along the lines of "I can't believe it's been 20 years since this" with a link to a YouTube video a performance from the Damage tour. One click, one listen, and I knew I had to have this album.

It's no surprise that the individual performances on Damage are impeccable: David Sylvian on vocals & keyboards, Robert Fripp on guitar, Pat Mastelotto on drums, Michael Brook on guitar, and Trey Gunn on bass.What makes this album special is the contrast between Sylvian's smooth, reluctant, languid  tenor (think Brian Ferry from Roxy Music) and the band's sharp, bright, and expressive performance. And as a live concert recording there's a certain spontaneity and intimacy to the album. (I've read others say that Damage is superior to the studio recording of these works.)

The video below is Sylvian and the band performing Wave, my favorite track from the album. Simply beautiful.


After falling in love with Damage I had to educate myself more on Sylvian's work which is where his "best of" album Everything & Nothing comes in. All I can say is that Sylvian is darn good lyricist.

Then, of course, I had to learn more about guitarist Michael Brook so I got his Hybrid album. But that's for another day.

The story goes that Fripp asked Sylvian to front one of the former's incarnations of King Crimson but he declined. Damage is a great window on what might have been.

You can learn more about David Sylvian at his website www.davidsylvian.com. You can find the other performers on the album here:


I received no compensation of any kind for this review.

No man is clever enough...

Sing along with the oldest song in the world (3,400 years old to be more precise). Then listen to music made from raindrops.

Write like a spook by following the CIA's Directorate of Intelligence Style Manual & Writer's Guide.

Something you probably don't care about: Dreamworks' new Apollo platform for CG animation which debuted with How to Train Your Dragon 2.

Someone has gone to the trouble of charting the optimal pairs of underwear to take on a trip based on number of days and number of times you want to do laundry.

For the novice software developer, here are 20 free ebooks for programmers.

For the reading enthusiast, here's one man's top 100 American novels listed in order of publication. Faulkner's Absalom, Absalom! made his top 10.

If you're thinking about writing a novel yourself, check out the 7 reasons not to write and the 1 reason to write. #6 Writing novels does not flatter the ego, even momentarily.

Science probes the top issues of our day: what happens to your tush when you sit? Now in 3D!

All this time I've been trying to cure cancer.

...to know all the evil he does. ~Francois de La Rochefoucauld
Posted by John at 3:25 PM No comments:

Sultry Kissing Lounge
is musical foreplay that
puts you in the mood.

Recorded on The Crimson ProjeKCt tour in 2014, Sultry Kissing Lounge consists of 13 tracks, each of which is Markus' solo improv that opened the show. One man, one Touch Guitar, so many layers and layers of rich, glistening, writhing sound.

If you like Stick Men, King Crimson, or Fripp just go ahead and get it. Otherwise give it a listen (link below) and then get it.

Markus' website is www.markusreuter.com and he's on Twitter @markusreuter. You can sample and purchase the album from iapetus. 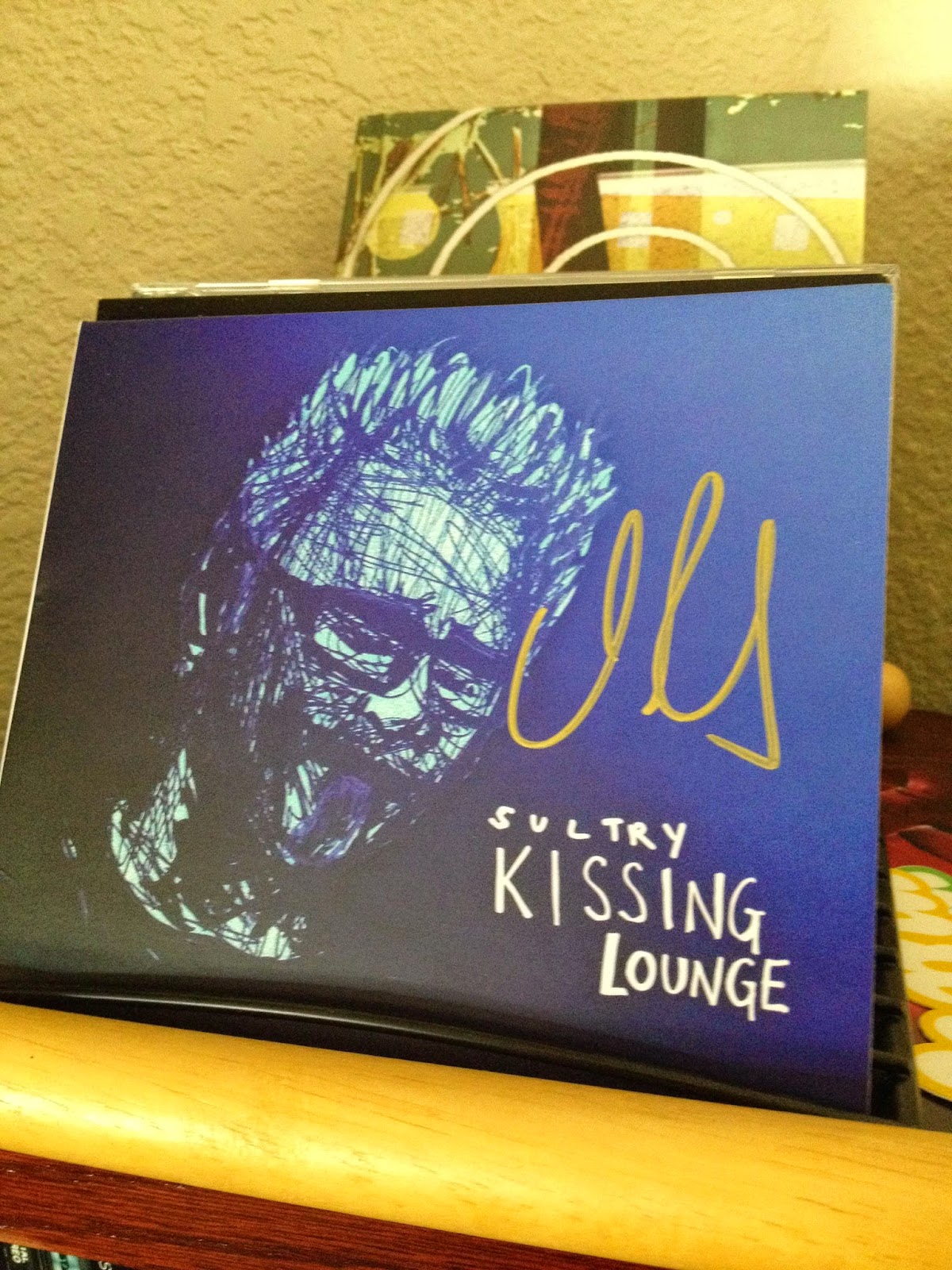 The purpose of life is to be defeated...

You've probably heard that Pink Floyd will release a new studio album this October. Here are 10 facts about The Endless River.

Must watch video of the week: Box was awarded Best in Show at SIGGRAPH's 2014 Animation Film Festival and it's easy to see why. For me it brings together so many things I like: computer graphics, geometric animation, black & white animation, interaction - even the soundtrack fits perfectly. See the other award winners at Cartoon Brew.

Cold War fan boys are all giddy now that the Mitrokhin Archive, twelve years worth of transcribed KGB-insider notes smuggled out of the collapsing USSR in 1992, are now being made available for public review.

Video essay about what it's like to be the official photographer of the USAF Thunderbirds.

Buzz Aldrin wants everyone to share their recollections of the Apollo 11 lunar landing online using the #Apollo45 hashtag as part of the July 20th celebration of the 45th anniversary of event.

Remember how we used to stereotype millennials by making them all out to be simply misunderstood go-getters? Now we can stereotype them as cutthroat careerists.

OK all you craft beer nerds, I hope you have a good sense of humor. Triumph visits the American Craft Beer Festival.

MRI scans show what parts of the brain are involved in pissing. The fallacy (phallicy?) in this science is the assumption that the brain has any control at all over the penis.

...by greater and greater things. ~Rainer Maria Rilke
Posted by John at 9:16 AM No comments:

Depression is the inability...

King Crimson has been around for a long time and has produced a lot of music. So picking the 13 best King Crimson songs is not an easy task. But Prog Sphere tried anyway. (I really like #13 Elektrik.) Speaking of KC, you can get a taste of the rehearsals of the latest incarnation from DGM Live, a raw snippet of a tune called Venturing Unto Joy Pt 1.

Music for Real Airports is a homage of sorts to Eno's classic Music for Airports.

How can you listen to music without hearing it? Checkout the Sonos CyFi Lab.

I have never used an "out of office" auto-reply on my email and that in itself may be more disturbing than these examples of witty auto-replies.

Shape magazine thinks that Fort Worth's Water Gardens (made famous by the film Logan's Run) is the 44th best free date site in the country.

Where's it easy and where's it hard to live in the U.S? Explore this interactive, county by county map that ranks the entire country. For North Texas folks here's a surprise: Tarrant county is ranked 680 of 3,135 (1 being easiest) but Colin county is ranked #22. Why does this surprise me?

This map-based website animates in real-time cyber attacks around the world. (Chrome only)

More geography fun: Smarty Pins is a Google maps game where you have to pin places throughout the world based on clues and you keep playing until you run out of points. (You lose points based on how far off you were in your pin placement.) My first attempt got me a score of 14.

Did you know a putter is someone who makes scissors? More craft pr0n for ya.

Former Disney animator Glen Keane said that he was going to do something with CGI that was much more like hand-drawn animation. An early look at the result is Duet, something he did collaboratively with/for Google.

The Atlantic has a very large, online, multi-part photo essay on World War I.