The love of complexity without reductionism makes art...

Trey Gunn announced the pre-sale availability of a CD (looks like the first of two) from The Security Project, "the timeless music of Peter Gabriel re-envisioned." Go to the link to stream and example and place your order.

Adam Holzman talks about his "optimistic evocations" with Anil Prasad on Innerviews. Adam is currently keyboardist for Steven Wilson and prior to that, among other things, he was Miles Davis' music director. If you're interested, you can also get Adam's CD Deform Variations.

You may now be scoffing at Poop Peeps, but they aren't nearly as stupid as a Glitter Beard.

Read how this guy "open sourced his face," aka 3D printed his own orthodontics.

Winners of the Smithsonian's 2015 photo contest are online and I can't argue with their grand prize winner. And 2016's contest is now open for entries.

Here's a nice bracketing of current politics and society. Donald Trump is a repugnant douche yet is the leading Republican candidate for president. At the same time, someone wrote Trump slogans on the sidewalk in chalk at Emory University and some of the hyper-sensitized students there felt threatened.

Let science speak for itself: "the butthole is one of the finest innovations in the past  540 million years of animal evolution." It seems that a theory of evolutionary biologists is that when living creatures developed an anus (in other words, stopped pooping through their pie hole) it spawned a great diversification (and lengthening) of life forms. But hold on to your doody. New science has shown that comb jellies, long thought to be one of those primitive life forms with a combo mouth/butt actually has dedicated exit holes. Whoa, is the sphincter now less or more important from an evolutionary standpoint?

...the love of complexity with reductionism makes science. ~E.O. Wilson
Posted by John at 10:09 AM No comments:

There was a moment during my first listening of J. Peter Schwalm's The Beauty of Disaster when I leaned back in my chair and muttered to myself "Oh. My. God." I was moved by the the rich interplay of tension and release Schwalm had created in this recording.

I first became a fan of Schwalm's with 2001's Drawn from Life, co-produced with Brian Eno. (Some day I will listen to Drawn from Life alongside Stevie Wonder's Songs from the Key of Life because I believe the parallels must exist.) More recently, his 2014 album Wagner Transformed (again with Eno) experimented with the operatic composer's work in a modern framework.

To a certain degree, I hear Wagner Transformed's tonality within some of the tracks on The Beauty of Disaster. In contrast to the fullness of the tracks on Wagner, those on Disaster are relatively sparse, tending toward the ambient. Yet it's precisely that economy of the compositions that creates a richly evocative dialectic.

Schwalm has been quoted as saying that Disaster was influenced, in part, by his viewing of photographs of natural and man-made disasters. He wanted to balance the despair he saw with a sense of hope and recovery. There are other contrasting influences: the detached beauty of a natural disaster when viewed from an orbiting satellite, orchestral versus electronic instrumentation, sound versus silence, even slight timing offsets. They are all employed to great effect on Disaster. You can hear this for yourself in the album's teaser.

The album's 10 tracks are [translated with the help of Google Translate]:


William Faulkner said good fiction was born from the human heart in conflict with itself. Clyfford Still said his paintings were life and death merging in fearful union. Schwalm has achieved a similar balanced tension of despair and hope with The Beauty of Disaster. This album will be on my favorites list this year for certain.

The Beauty of Disaster is available from Rare Noise Records.

Schwalm's music can be found on Bandcamp and Soundcloud.

I received no compensation of any kind for this review. I was given pre-release access to the album for online listening but this review is based on the CD I subsequently purchased.
Posted by John at 3:00 PM No comments:

Plans are useless but...

And Bernhard Wostheinrich's new album, Cool Spring, is available for free. But why not pay a few bucks anyway?

I sure hope you're playing along in the Albright Knox's 3rd annual Art Madness, this year featuring sculpture.

Got a hankerin' for a burrito but don't know where to go? use My Burrito Finder! (It works and found El Taco H, the only place where I'll order a burrito.)

Here's a summary of one audience member's live tweets from a presentation by Gen. Michael Hayden, former head of the NSA and CIA. I've heard Gen. Hayden speak before and he seems like a good guy.

For Cold War junkies, vintage video of the crash site where a B-52 carrying nukes went down in 1961.

Put things in perspective with this visualization of WWII fatalities.

The NFL is considering several rule changes, one of which is the elimination of overtime in preseason games. That one seems like a no-brainer.

I think this qualifies as craft pr0n: the making of shiny mud balls.

Reheating steak seems like an oxymoron - who doesn't finish a good steak in one sitting and who'd bother to reheat a bad steak? Regardless, the best method for reheating a steak may surprise you.

Science sheds light on the important issue: sperm swim together in close groups through viscoelastic fluids.

More science? This video had me at random couscous.

...planning is indespensible. ~Dwight Eisenhower
Posted by John at 7:41 AM No comments:

With only a week to spare, friends and I finally saw the exhibit Jackson Pollock: Blind Spots at the Dallas Museum of Art.

It was well worth having to suffer Dallas traffic.*

The exhibition at the DMA is the only U.S. venue to show this rare and unique assemblage of black paintings Pollock produced in the period 1951-1953. These black paintings represent a stark contrast to his signature all-over paintings from the decade of the 1940's.

The expert commentary in the catalog delves into what Pollock was attempting to express with this new style, whom may have influenced it, and where he might have taken it had he not died in 1956.

The art speaks for itself. But that won't stop me from expressing a non-expert opinion. Pollock's use of black was always there, even in the famous all-over paintings. In those works he was able to use line as shape through density and layering. (I would attempt to analogize them with a fractal, a space-filling curve.) The black paintings seem to be a way of removing the veil of color from the all-over paintings, retaining the black, and giving the black lines area and heft through thickness and pooling. The interaction of those "black spots" with the unpainted background, whether it be paper or canvas, raises the latter to the foreground and in some of the later black paintings Pollock filled the grounded areas with color.

Let's start with photos of the black paintings. (And trust me, I was surprised that non-flash photography was permitted.) 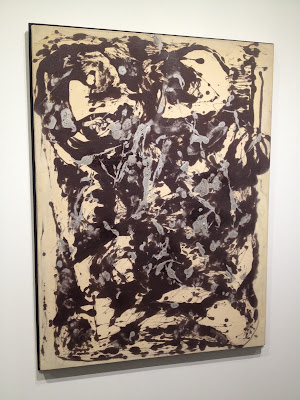 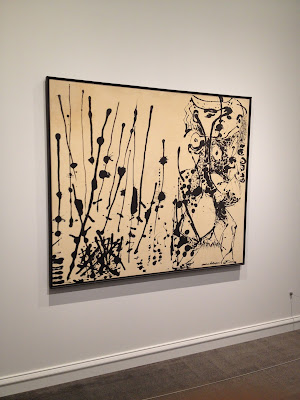 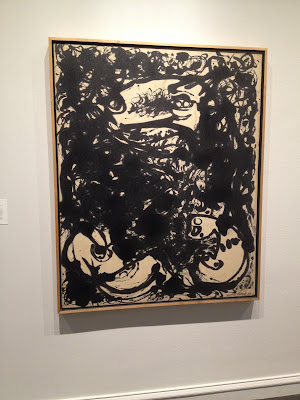 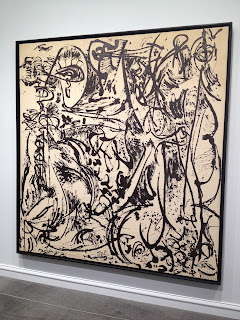 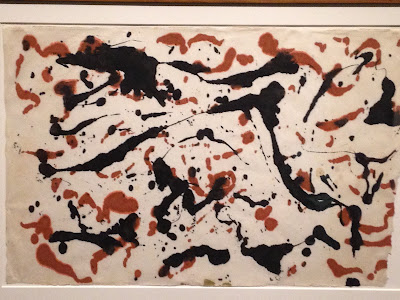 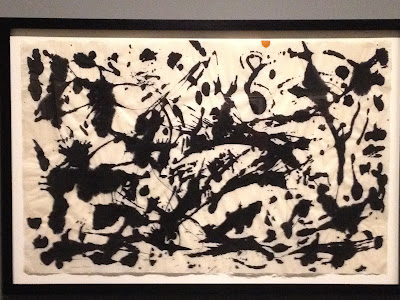 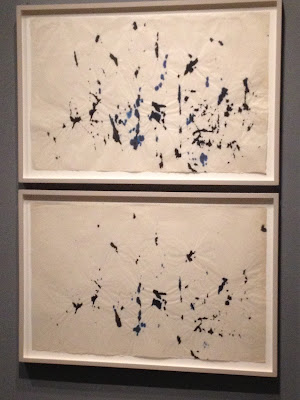 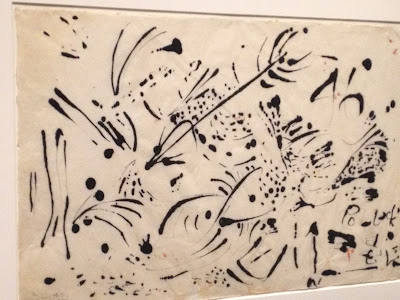 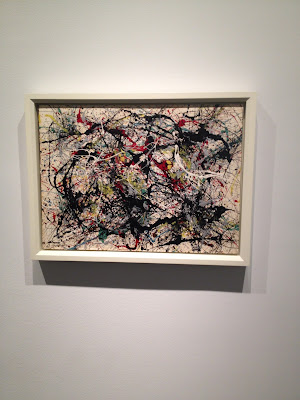 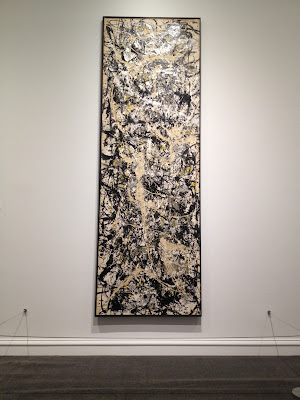 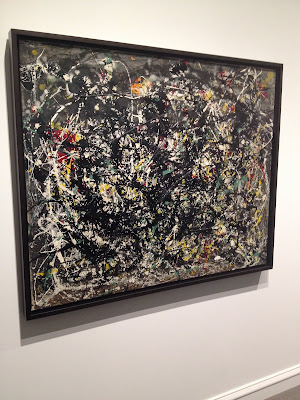 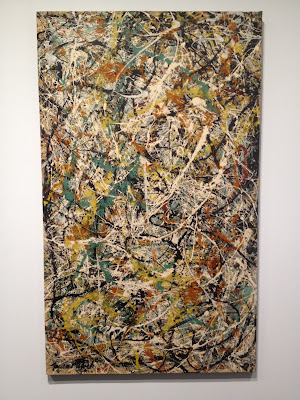 *Fort Worth is where the west begins. Dallas is where the east peters out. I am waiting for one person in particular to give me grief about that comment.

The beginning of wisdom is...

Here's a great live performance of Dirty Smelly by KoMaRa. Their debut album was one of my faves from last year.

If you prefer your tunes a bit more mellow, here's a video teaser for the upcoming album from Eraldo Bernocchi and Shinkiro called In Praise of Shadows.

Maybe jazz is your thing. You'll want to check out this collection of early jazz legends, 1000 hours of music.

The Frank Stella retrospective is coming to The Modern so this article on Stella and his work is a nice appetizer. He's quoted as differentiating himself from the abstract expressionists by saying "Rather than having a painting full of gestures, the painting itself became a gesture."

ikono TV is a new channel that lets you view art on your TV. You can see them on Vimeo too.

If you can teach a robot to paint, does that mean it's creative?

After the Big One is interesting reading about a fictional (but scientifically likely) huge earthquake in Portland.

If you didn't win the lottery last week, at least you can print your own (Monopoly) money.

Hooray for Colleyville for leading North Texas in annual charitable giving per capita.

Another serious topic as documented by the CIA in 1953: A Study of Assassination.

...the definition of terms. ~Socrates
Posted by John at 7:08 AM No comments:

The greater the scientific advance...

While we're on films, you Star Wars geeks will probably like this complete history of the Millennium Falcon. (And who pronounces "falcon" like FALL-cahn. No one.)

Apollo 10 astronauts heard spooky space music on the dark side of the moon. Or not. (And it's not pronounced "nassau.")

More astronomy geekery you say? How about the "blue bubble" around star WR-31a?

Because I don't have $9,500 just lying around, you can bet I'm not in the "1%." But did you ever wonder what your percent is? Use this calculator from the WSJ to find out what percent you are.

eero is called the world's first home wifi system. Anyone try it yet?

Next time you're in Cincinnati, check out one of these signature places to eat. I've been to Skyline Chili of course, but the one on Clifton near the university.

This interview with Michael Hayden, former director of both the NSA and CIA, is worth watching and/or reading, especially where he talks about Apple and encryption. I've seen him speak in person and he seems like a smart, decent person.

Don DeLillo's fiction has puzzled me for years. His short story in the New Yorker, Sine Cosine Tangent, is no different. Starkly genuine.

P.S. I have no idea where the extra space between paragraphs came from and didn't feel like battling with blogger to find out.
Posted by John at 8:55 AM No comments: