What we anticipate seldom occurs...

Guitar legend Allan Holdsworth will release an album of previously unreleased tracks and you have an opportunity to pre-order with various premiums at Pledge Music. I've already made my pledge.
Coin collecting is not difficult because sometimes you just have to look at your pocket change. For example, you can still find Buffalo Nickels that are worth between $0.50-$1.00. Read about four other old coins you can still find.

Seafarers will enjoy this 93 minute, 4K, uncut shot from the bow of a ship as it sails the South China Sea. Be sure to set the playback to 4K and go full screen.

The North Korean government has come up with 130 new patriotic slogans. (I hope they didn't pay their PR firm too much for this.) They are comic gold. A couple examples:
In other movie news, director Neill Blomkamp (District 9) is going to make an Aliens sequel that is independent of Alien 3 and Alien Resurrection. This should be interesting.

From the craft pr0n department comes this video love letter to plywood.

Get lost in Lights.

...what we least expected generally happens. ~Benjamin Disraeli
Posted by John at 8:32 AM 2 comments:

From the depths of hell,
rising through purgatory,
Langdon leads us up.

Inferno appears to be the latest Robert Langdon adventure (i.e. The DaVinci Code) from Dan Brown. His other books have been solid adventures full of mystery, conspiracy, and symbology so I gave this one a try.

When Prof. Langdon wakes up in an Italian hospital with no memory of how he got there or why, his attempts to unravel his memory only further ensnare him in a Divine Comedy themed mystery that he has apparently partially solved but can't recall. But he's running out of time as a mad scientist (literally) plans to unleash something unthinkable on the world. And without a memory, it's hard for him to tell who's really his enemy and who's really his friend.

There are a few places where Inferno gets a little talky as it tries to transition through a plot twist and at least one place where I caught a whiff of Michael Crichton-esque screenplay, as opposed to novel, writing. But overall Inferno was an enjoyable book.

And it inspired me to put Dante's Divine Comedy on my to-read list.

I received no compensation of any kind for this review.
Posted by John at 4:04 PM No comments:

Overworked and Overwhelmed by Scott Eblin

Overworked? Surely.
Overwhelmed? Without a doubt.
Help? Who has the time?

The title, Overworked and Overwhelmed, pretty much says it all when it comes to my decision to buy Scott Eblin's book while passing through Chicago's O'Hare airport. I was in the middle of reading Williams and Penman's Mindfulness and this one seemed to be the obvious addition to my reading list.

But me reading this is like an alcoholic reading a book called Drunk and Hungover in the sense it was more like reinforcing what I already knew rather than learning how to address it (although the subject matter is very similar). The latter is what I expect to get from Mindfulness, despite this ultimate goal being almost a year in the making.

How much longer will it take? I'll see if I can find the time.

I received no compensation of any kind for this review.
Posted by John at 4:22 PM No comments:

Who knew you could play
guitar by doing more than
just plucking the strings.

You won't find Adrian Belew's Twenty on sale at Amazon or anywhere else that I know of. That's because it was one of the rewards made available to backers of his Kickstarter campaign for FLUX: "music that is never the same way twice."

The album is a collection of 20 of Adrian's favorite songs from his previous albums. What comes through is his strong Beatles influence. Many of the songs sound like they could've been pulled directly off a George Harrison album. But for a follower of his work with King Crimson, Twenty was a nice way to broaden my perspective of his work.


To give you an idea of what Adrian Belew can do with a guitar, here's him playing solo, coaxing and sometimes strangling music out of his instrument. (Be sure to listen to parts 2 and 3 also.)


For a guy who jokes about being fired from two bands during 2014 (Nine Inch Nails and King Crimson), Belew seems to have quite a bit more music to share. 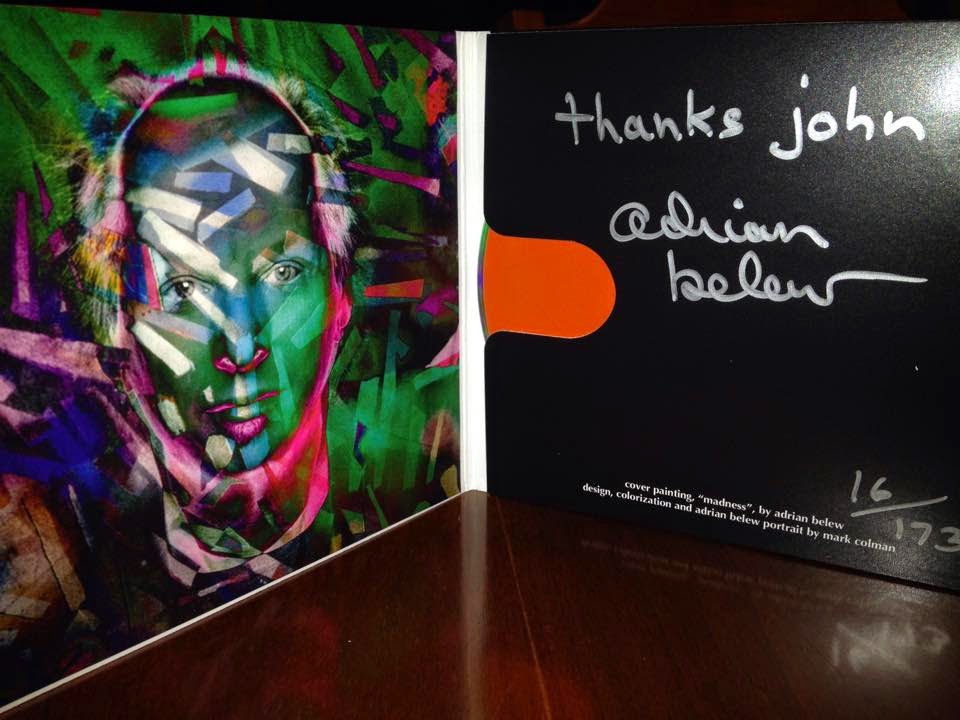 I received no compensation of any kind for this review.
Posted by John at 2:07 PM No comments:

An album with two
names, competing visions of
tempo and rhythm.

For an album of ambient soundscapes, Endless City/Concrete Garden by the pair of Roger Eno and Plumbline (aka Will Thomas) is rife with tension. To this ear it's as though Eno's piano is one's public face - serene, flowing, clear - with Plumbline's percussive, pulsing effects a muted cacophony of nearly suppressed inner thoughts. (At least that's how I imagine them splitting the duties.)

For a view less psychological, the effect is like a precision timepiece with sweep second hand while beneath the face, tiny machinations give time its pulse.

The overall effect is one of fine balance, of depth, and a slightly maddening mystery as the two halves compete for dominance.

Try a taste for yourself with Pulling Strings.

I received no compensation of any kind for this review.
Posted by John at 11:39 AM No comments:

As I write this I'm streaming the album A Winged Victory for the Sullen by Atomos. This is my first listen and I know nothing about the artist.

Who's the best blogger in Fort Worth? Have you voted yet?

"We live in an age when all manner of scientific knowledge faces organized and often furious opposition." In this article from National Geographic we find toward the end a relatively simple but understandable distinction between two camps. Science embraces the truth over the tribe, others embrace the tribe over truth.

Even NPR dips their toe into this issue with "science denial has actual real-world consequences."

Where's C.P. Snow when you need him?

Exactly how do science and the public differ? A lot. Genetically modified foods, animal research, nuclear power. Or so says the Pew Research Center.

So to all you anti-vaxers out there, do you have a parental right to refuse to have your kids vaccinated? Given all the other shitty things we let parents do to their kids, sure. But don't for a minute believe that your stupid decision is inconsequential. Perhaps your germy kids shouldn't be allowed in public schools. I certainly don't want them in my house or in the airliner I'm on.

And then there's this children's book written about "the benefits of having measles." The reviews on Amazon are better than anything I could write, like this one: "My infant daughter went blind after contracting measles from an unvaccinated child, and yet there's no braille version of this wonderful book for me to give her someday to explain to her how awesome the disease that took her sight away is."

Google Earth Pro is now free. So what could I use it for? (Be certain to see the special license key on the right side of the page.)

From Earth to our solar system. Riding on Light is for you astronomy geeks and shows our solar system as viewed by a photon emitted by the sun. Jupiter shows up at about 45 minutes. Which should emphasize physical size given how fast light is. Don't worry - the video has a nice soundtrack by Steve Reich.

And in something only tangentially related to astronomy, here's Wikipedia in 3D galaxy format: WikiGalaxy.

More? How about a periodic table of sexy talk. Along those sames lines comes an article from The Onion that made me LOL.

And it's worth taking a look at this compilation of the Oscar for best animated film being presented if only to see Elke Sommer and Don Knotts giving the award to Chuck Jones' The Dot and the Line. (Of which I have an original cel.)

You can take a stroll through the exhibition of Matisse's cutouts.

What teh interwebs was meant for: a collection of Milwaukee bus passes.

How well do you know the sounds of technology? Find out by playing Name that Beep.

For something truly zen-like, here are demotivational posters made from Werner Herzog's quotes. This is my favorite: "Civilization is like a thin layer of ice upon a deep ocean of chaos and darkness."

This article's subtitle is "Your future smartphone may be made out of poop metal." Interested now?

And finally, enjoy the rest of your day playing this Daft Punk console.

...to survive is to find some meaning in the suffering. ~Friedrich Nietzsche
Posted by John at 11:06 AM No comments:

The one word that best
describes this live performance
must be courageous.

Listening to Robert Fripp and Brian Eno's album Live in Paris May 28, 1975 is a bit like engaging in musical archaeology, not because 1975 was a long time ago but because this rare (and recently cleaned-up) recording captures two pioneers of electronic and ambient music creating collaborative and improvisational soundscapes before such a thing even had a name.

The live recording on discs 1 and 2 is gritty, the performance avant garde, the listener experience arresting (in hindsight), perhaps baffling (to the contemporaries). You can get a taste from the video below.

Keep in mind this performance was pre-digital and Eno's work was all analog and live. Yet he and Fripp deliver an eye-opening peek at future possibilities.

I received no compensation of any kind for this review.
Posted by John at 3:08 PM No comments: