The Fallen Angel by Daniel Silva

The fallen angel -
not a Caravaggio,
maybe Gabriel.

Central to the entire series of Daniel Silva's books starring Gabriel Allon is the question of how Israel's top intelligence agent can also be the world's premier restorer of ancient Christian paintings. Silva pulls it off quite nicely, ensuring that despite his flaws Allon can do both jobs. Allon's seething rage against his enemies contrasts nicely with his cool head and light touch when it comes to his art.

In The Fallen Angel, Allon looks into a black market in ancient artifacts only to find something much more explosive. And unlike a lot of these thriller novels, this one had me doing a little side reading on the history of The Temple Mount.

I received no compensation of any kind for this review.
Posted by John at 6:12 PM No comments:

Time is dead as long as it is being clicked off by little wheels;

~only when the clock stops does time come to life. ~William Faulkner
Posted by John at 9:33 AM 4 comments:

After not attending for 20+ years, my lovely wife and I strolled through the annual Main Street Fort Wort Arts Festival today. For those unfamiliar (or out of touch like me), Main Street is a highly regarded multi-day festival of art, music, food, and fun and has been awarded the IFEA's Grand Pinnacle award 3 of the last 5 years.

Here are the artists whose work caught my attention. 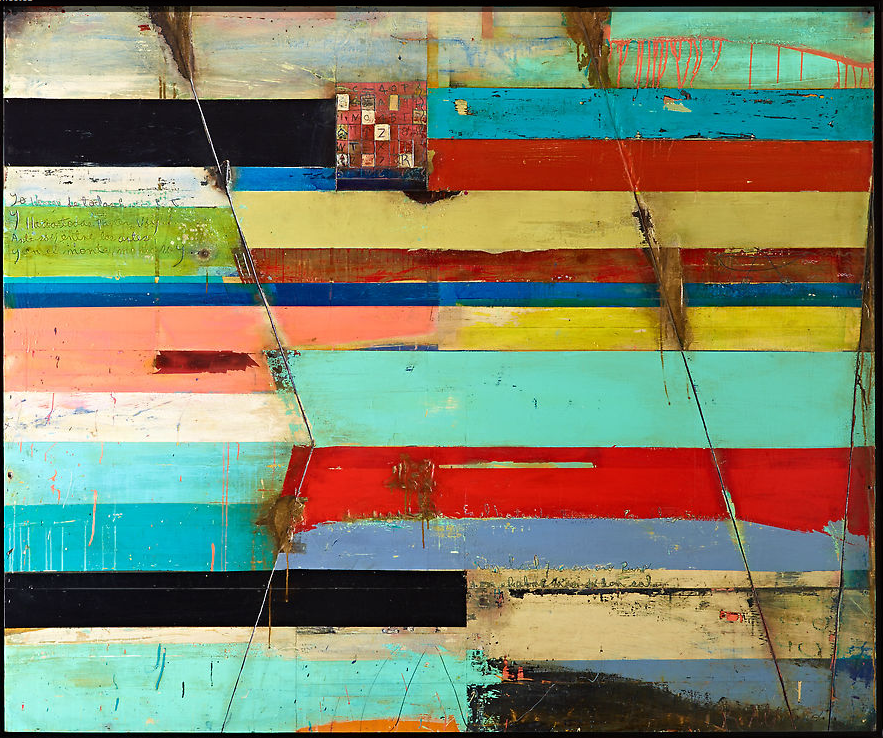 All things being equal, I would've loved to come home with a painting by Rey Alfonso. He paints on Baltic Birch using only pure pigments and distresses the pieces by sawing them, burying them, and burning them. I see a little Diebenkorn, a little Scully, a little Fisher and a lot of Alfonso. 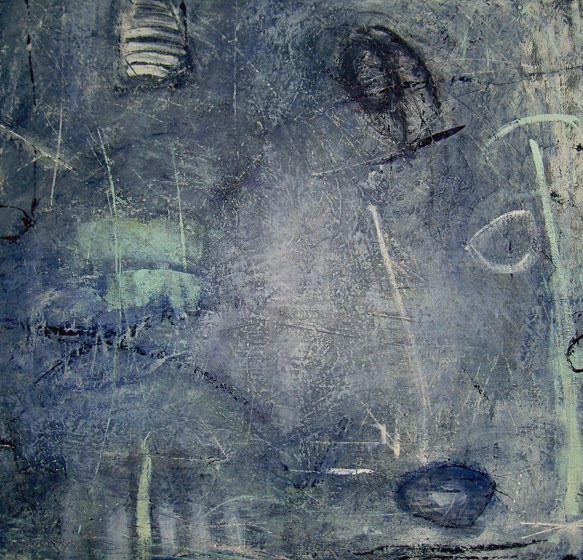 Lisa Burge told me about her architectural influences and how process is strongly evident in her worked over canvases. She also creates monotypes by painting on glass and then pressing that up against paper to create a one of a kind work. Booth 502 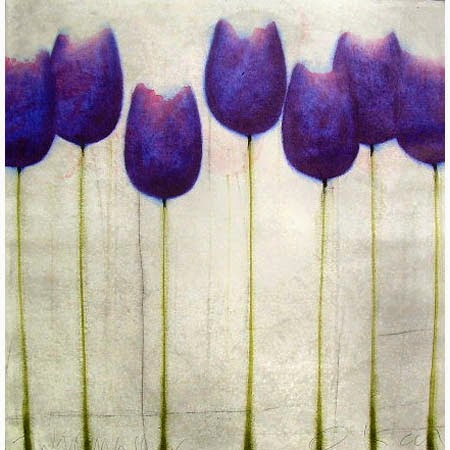 Scott Olson and I talked about the similarity between his work and that of Donald Sultan but also looked at the fine detail he adds in graphite (I think). Note: Scott's website says not to use his images w/o permission. Sorry. I wanted to share. 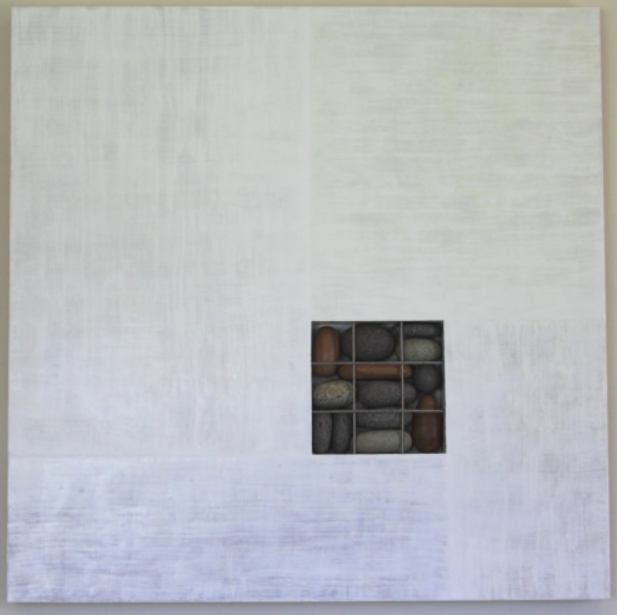 Cathy and I agreed that the work of Hidden Spring Designs would look good in a beach house. Booth 514

I'm not one much for sculpture but the wood work of Craig Lossing has such visual tactility that I could easily see myself getting one of his half carved, half natural wooden pieces. (Sorry, no pics.) Booth 439

The first single, Daddy's Car, is now available from the upcoming album Someday World from Eno and Hyde.

Apparently, MTV had a show called Amp that featured electronic music. (Must've been a long time ago. Imagine that - MTV playing MUSIC!) Every song played on the series' 2-season run is available for free on Rdio (login required).

What is the top scourge that runs rampant these days? If you say "towels" then the body dryer is for you.

Is it worth 99 cents to have an app to tell whether that brew you're pondering is truly a craft beer? Craft Check

If design is the creation of affection as Milton Glaser says, how do you think he'll feel about modern beer labels?

It's a little bit late for this one but... William Faulkner's favorite April Fool's Day pranks. #3 Have a mentally disabled person be the narrator of your novel!

Code One magazine features photos from the boneyard.

Watch this brief animation to get a few tips on how to improve all those tables you create in Excel or PowerPoint or whatever.

Kind of a convoluted map but, states and countries that are closer to Texas than Texas is across.

The BentProp project - recovering the remains of U.S. servicemen from WWII battlegrounds in the Pacific theater.

Do you want your software reporting errors as QR codes?

Damn the 1%, they get all the good stuff. Like this gold embossed toilet paper for 179 euros per roll.

The title is a bit of link bait but the article Future Unemployed Rally for Diversity at Dartmouth includes the statement "Any college president whose top priority is “diversity and inclusion” and not “providing a top-quality education” and “preparing our students to successfully enter the workforce” ought to be fired by the trustees." Repeat after me, diversity is a means to an end, not an end unto itself.

A trove of behind-the-scenes photos from the filming of 2001.

Derive a colormap from a still frame from movies in color.

Right now we're feeling 88% positive, at least according to our tweets. How We're Feeling.

If someone really said this and believes it I fear for the human race. "If somewhere within the Bible I were to find a passage that said two plus two equals five, I wouldn’t question what I’m reading in the Bible. I would believe it, accept it as true, and then do my best to work it out and to understand it." It does a fundamental disservice to the basic natures of faith and logic.

This year's Tex Avery Animation Award winner is John Kricfalusi known for Ren and Stimpy and other works you can see at his blog, John K Stuff.

How much time have you spent watching TV?

You can't swing a dead cat in Texas this time of year without seeing someone pooping on bluebonnets. Wait, wha?

In this infographic illustrating methods of peeing with morning wood, as much as I like the blow dryer technique it should be disqualified due to use of apparatus.

"The interestingness of an animal is proportional to how difficult it is to figure out where its butthole is." True Facts about the Octopus

You have a Spirograph as a kid? It's kinda like that: Guilloche pattern generator.

...not wanting to know truth. ~Friedrich Nietzsche
Posted by John at 3:46 PM No comments:

Vinyl to Digital to CD via Murfie Music

Murfie Music's vinyl ripping service (currently in beta) is almost magic. I sent them my albums and the next thing you know I've got lossless ALAC files with nary a hiss or pop. It seems like magic but it's not.

I don't even remember when I signed up to be a beta tester of Murfie's vinyl ripping service but fortunately last November I got the email saying I was in and they'd clean and then rip up to 15 of my old vinyl LPs.

You see, I had been thinking (not too hard) for several years about what to do with old my old albums. I've got a few but my B&O turntable hasn't worked in over a decade since I broke it while packing for a move. And now there's no one in Fort Worth who'll work on it. (Last time I checked I would've had to ship it to Austin.) I had thought about getting one of those USB turntables to convert vinyl to digital media but that process would've taken quite a bit of time. And yes, I could've just repurchased my LPs on CD.

And then along came Murfie with their offer to beta test. So I packaged up 15 of my LPs in the mailers they provided and sent them off to Madison, Wisconsin via UPS. That alone was quite a leap of faith for me.

So what happened next? Here's what they told me.
The results in lossless ALAC format are really good. There's no way to tell that the files came from vinyl.

More importantly, it's absolutely fantastic to hear music that I haven't heard in over a decade. Murfie Music's vinyl ripping service delivered exactly what I wanted - my vinyl LPs as high quality digital files. And I even got my vinyl back. (And yes, I burned the ALAC files to CD for playing on the home stereo.)

I don't know when Murfie's vinyl ripping service will go into production. There's a comment on their website about making special arrangements for vinyl (they currently host your CDs and digital files). I have no idea what the cost of the service will be. But I'm fairly certain I'll be sending more vinyl to Madison soon.

If you have vinyl to be digitized, give a listen to Murfie.  https://www.murfie.com/

Disclosure: As a beta tester, Murfie ripped 15 albums for me at no cost.

Culture Clash by The Aristocrats

A rock trio by
any other name wouldn't
sound nearly as sweet.

After putting The Aristocrats' Boing! We'll Do It Live on my list of 2013 favorites it shouldn't come as a surprise that I've delved into their studio output with 2013's Culture Clash.

What I find quite humorous is how the band is miscategorized. The band themselves have joked about being called a jazz band. Google Play seems to think they're "Country & Folk" which I find hilarious. I noted in my previous commentary the influences I heard. But let's just call these guys a rock trio and move on.

You may rightly infer from the song titles that the band brings a certain vitality and sense of humor to what they do. Add to this a passion for performance and extreme musicality and you have a very enjoyable album that features melodic, multi-genre, up- and down-tempo tunes that aren't over the top. It's mesmerizing because you don't know what's coming next.

Listen for yourself. Here's a video preview that starts out with the album's title track.


You can read, see, and hear more about the band at these online locations.

So guess what I just put on my Amazon wish list. Their 2011 self-titled first album. Should be good.

Pursued, pursuing,
it's hard to tell who is who
in The Great Gatsby.

Considering that F. Scott Fitzgerald's The Great Gatsby has been described as one of the great American novels it's a bit surprising that I just now finally got around to reading it for the first time.

I'll skip the literary criticism until maybe my second or third reading.

The true joy, however, was hearing the audio performance by Frank Muller who passed away in 2008 due to lingering complications of a horrific motorcycle accident in 2001. Frank could read the phonebook and make it sound interesting.

(The haiku is a reference to the quote from the novel "There are only the pursued, the pursuing, the busy and the tired." Not to confuse ambition with pursuit, I get the impression Gatsby was pursued by (and even pursuing) his past. And while you might think "the busy and the tired" is a direct analogy to the wealthy and the working poor I'd turn it around.)