Line into Color, Mesh into CFD

Painter Helen Frankenthaler's work has been on my mind since seeing the exhibition Fluid Expression: The Prints of Helen Frankenthaler at Fort Worth's Amon Carter Museum of American Art earlier this week. While there I also purchased and then read John Elderfield's book on her painting, Line Into Color, Color Into Line. Both left me with a much stronger appreciation for her work.

As often happens to me, certain concepts, ideas, or statements about art trigger analogies to my work in computational fluid dynamics and mesh generation. Such was the case when Frankenthaler was quoted in the book as saying


I felt more and more that the drawing should come from what the shapes of the colors are; rather than, "I am arranging this with lines or confinements or patterns." And I do very much believe in drawing, especially when it doesn't show as drawing... When I talk about drawing, I mean "how are you getting your space," not where the pencil is going.

To put that quote in context, the book's theme was how Frankenthaler exercised three types of lines (drawn lines, the perimeter of regions of color, and the edge of the canvas) to great effect in her paintings that are more typically known for their ethereal washes of color - poured, stained, painted or otherwise.
But first a bit of background. Within the world of computational fluid dynamics, the mesh is the digitalized version of the object around which you wish to solve the equations of fluid motion - digitalized so the computer can understand it. Think of it as the scaffolding on which the fluid will be simulated. In the illustration below (image source), the mesh lines around a ship's hull define where the computations will be performed. 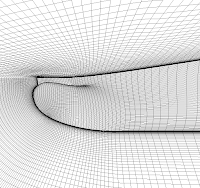 When the equations of fluid motion are solved on the mesh, the results are often presented as graphical contours of a some property of the fluid like pressure as shown below on the ship's hull (image source). In this picture, red represents high pressure and blue represents low pressure.

The analogy I'm making between Frankenthaler's paintings and computational fluid dynamics is lines are meshes and color is the CFD results. When she says "drawing should come from what the shapes of the colors are" I hear the case for mesh adaptation (closely coupling the mesh to the actual flow of fluid instead of just the geometry). When she says she believes in drawing "especially when it doesn't show as drawing" I hear the case for "invisible" mesh generation (because meshing is not and end unto itself, only a means to an end). Regardless of whether we're talking about lines in terms of mesh or lines in terms of boundaries of the regions of color, it's true that the mesh is how you're getting your space, the space within which the simulation will be performed.

Other than the fluidity with which she applies pigment to canvas, there's little that visually ties her paintings to CFD (the images above make this clear). The drawn lines in Sesame don't look anything like lines in a mesh and the regions of color don't look much like fluid flow. But it's Frankenthaler's process and approach and her way of thinking about the interplay of line and color, mesh and CFD, creating and defining space, that brings art and science, a bit closer, at least in my mind.
Posted by John at 12:30 PM No comments:

Mathematics is the art of giving...

Let's start with something that might be hard to get past once you start thinking about it. Is space-time an emergent (i.e. primary) property of the universe or secondary (i.e. evolved from the primary)? If time itself is secondary, might that explain why it's asymmetric (can only run forward)? And if questioning where did time come from isn't enough for this universe, in a multiverse would time in all universes be synchronized?

Not enough for you? Scientists have observed something in nothing - quantum fluctuations in a pure vacuum.

Where are the Voyager spacecraft? And where are the last remaining people on earth who still control their mission?

This article on how famous artists overcame creative blocks ends with a quote from Chuck Close: "Inspiration is for amateurs - the rest of us just show up and get to work."

The USS Indianapolis has been found at a depth of 18,000 feet in the Pacific Ocean. This wreck is historically significant. The ship was returning to the U.S. after delivering the atomic bomb to Tinian Island. After it was sunk, the surviving crew was butchered by sharks. (The story told in Jaws is real.)

"It was a dark and stormy night" is the inspiration for the Bulwer-Lytton Fiction Contest which seeks the opening line to the worst novel. The 2017 winner is a gem about elves and flowers. If I could summon the motivation, I might enter. Someday.

The BBC compiled a list of the 100 greatest comedies. I've only seen 21 of them.

An artist on Pandora would need 1.2 million plays to earn minimum wage. A lot of people are getting paid on these streaming platforms, but what they pay content creators is a appalling.

According to this video explainer, Led Zeppelin's John Bonham's drumming excellence was due to the fact that he played more along with the lead guitar than the bass.

The Great 78 Project is digitizing music from vintage 78 rpm records. I'm not going to even try to explain that to young-uns. There's a 1951 recording of Yosemite Sam singing (i.e. Mel Blanc).

Anyone who's had to deal with used needles (i.e. diabetics) can appreciate a needle grinder that produces non-toxic waste that can be sent to the landfill in your regular trash.

Total sperm count in Western men decreased 59% between 1973 and 2011 and continues to do so, likely due to chemical exposure, stress, obesity, smoking, poor nutrition, and lack of exercise.

I had no idea there was a Microsoft Office World Championship.

Lest a woman's other body parts feel unaccesorized, a Japanese company has introduced crotch charms, jewelry that dangles from the crotch region of a swimming suit.

Aside from sharp blades near your junk, shaving your pubes is riskier than you think - it leads to a significant increase in the risk for a sexually transmitted infection.

And this guy collects poo. At least after its been fossilized.

The Berlin Project by Gregory Benford

What if the U.S. developed the atomic bomb a year earlier, in 1944?

This is the teaser for Gregory Benford's The Berlin Project, a thriller that ticked three of my boxes: nuclear weapons, espionage/military thriller, and alternate history.

Rather than a flight of fancy, Benford crafted this tale around his father-in-law's actual experiences back in the 1930s and 1940s working with and around Leslie Groves, Albert Einstein, Oppenhiemer, Bohr, and the entire cast of real-life Manhattan Project characters.

But back to the premise. Assume that science (and the politics of science) had turned out a bit differently back in the day such that the bomb was ready in '44 instead of '45. How might the Allies have put it to use, if at all? The difference in the science may seem small (and entirely plausible), but the results in wartime - maybe not so much.

The characters (perhaps because they are real) are so vivid and Benford's story is so believable (due to his research and work pulling it all together) that the resulting book is totally enjoyable. And while I could put it down, I couldn't wait to pick it up and finish it.

You can read more about Benford at his publisher's website.

"Nothing can be said about writing except when it's bad. When it is good, one can only read and be grateful."

I received no compenstation of any kind for this review.
Posted by John at 12:35 PM 2 comments: