A couple years ago I saw the exhibit Cult of the Machine: Precisionism in American Art at the Dallas Museum of Art. In addition to seeing a startlingly beautiful and unique Georgia O'Keeffe, the exhibit left me with such a positive impression that I used a quote from the curator in a presentation I gave at a CFD conference shortly thereafter. After all, precisionism was a movement that depicted in art the glory and power of technological and architectural development and in America in the 1920s and 1930s. And CFD is nothing if not precision.

Through a recent article in the WSJ on the exhibit Ralston Crawford: Air + Space + War, I found a fork in the Precisionist road. Crawford's work matured during WWII when he had access to a variety of aircraft settings (flights, factories) and post-war nuclear testing - including being in the U.S. Army. That exposure to death and destruction greatly influenced his work, retaining the flatness and precision of Precisionism while introducing an element of chaos that heightens the work's emotional appeal.

Certainly my initial attraction was the usual juxtaposition of several of my interests (painting, aircraft, nuclear weapons development). But upon reading the exhibition catalog and learning about the development of Crawford's work and how it fits with his contemporaries (the chapter on aviation art was really interesting) I found myself loving his painting solely on its own merits - the shift of perspective, the rough edges, the colors. 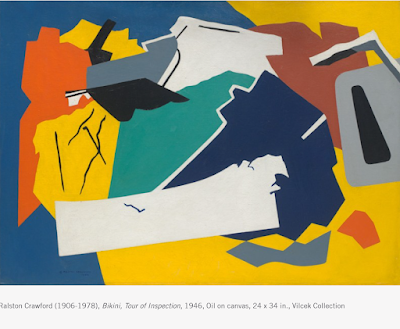 So if you're in Pennsylvania, I recommend heading over to the Brandywine River Museum of Art before the exhibition closes on 19 Sept. For everyone else, here's a video walkthrough that deserves more than 72 views.

At what point do we just throw our hands up and say to the anti-vax (or the white-washed "vaccine-hesitant") people, "Fine. Don't get vaccinated. Get sick and die."

Because I've gotten to feeling that way more and more often.

Well, the simple answer is you don't. You go back to protecting the public health.

Because C-19 vaccination is at best only half about personal health.

Remember that COVID-19 (which should've been called SARS-2) is a pandemic and a national emergency. Which is why the other half of vaccination's importance is public health.

Each unvaccinated person is a walking petri dish for the virus and an enabler of its transmission and mutation. As long as the virus transmits, the unvaccinated will get sick and die. If that isn't bad enough, these walking virus hosts will give SARS-CoV-2 the opportunity to mutate. Mutations happen all the time and most are benign but there's always the possibility of something worse than the delta variant, worse in the sense of it being immune to the current vaccines. Which would put us all back at square one.

Not feeling compassion for your fellow citizens? How about the sheer economic cost of closed businesses, the strain on hospitals, the federal expense? Can you be motivated by your wallet?

Sadly, everything about preventing SARS-2 applies to the flu. Get vaccinated, stay home when you're sick, wash your hands. If we all followed those guidelines for the flu, the annual gains in productivity (or decrease in lost productivity) would be enormous. Nothing about remediating SARS-2 is new. It just highlights so many shortcomings in society. (One of which is the abject failure of public education to impart a basic understanding of virology and statistics with which we probably would be in an entirely different situation today.)

Do you have the right to refuse to be vaccinated? Sure. But that doesn't mean society has to accommodate your personal choice. Kids gotta be vaccinated (and prove as much) to attend school. Why should you not have to do the same to return to work or public events? You have freedom of choice but all choices come with consequences.

It's as though half the country is waiting to see World War Z outside their front door before they'll even consider driving over to CVS for a jab. FOR FREE.

To say that I'm disappointed would be an understatement. Surprised? Not so much.

Email ThisBlogThis!Share to TwitterShare to FacebookShare to Pinterest
Labels: rant

There is no way to happiness.

Drumming but visualized as bouncing balls.

Here's a Houston Chronicle article about the renovated Rothko Chapel. If the real thing is even close to the photo at the top of the article with the improved natural lighting, it'll be like a whole new experience - in a great way.

If you like the Vim text editor, you may like browsing the web with vimium, a Chrome extension.

In the beginning, there was a perfect fluid (aka quark-gluon plasma).

A couple of years ago, I got to see fragments of the Dead Sea Scrolls that were on tour as a museum exhibit. Just recently, new fragments have been discovered.

Speaking of discoveries, a secret Cold War project in Greenland drilled some ice cores and then forgot about them in storage. When rediscovered, they were found to contain fossilized plants.

How about a wee bit of King Crimson in the form of a "remnant" from the recording of THRAK: Did We Make the Album?

Yet another reminder that the World Championship Air Race (nee Red Bull Air Race) is coming back in 2022.

If you're a fan of the band Stick Men (Markus Reuter, Pat Mastelotto, Tony Levin) you can enjoy recorded web event with the band and fans talking about the history.

Excellent 4-part series of articles on which color scale to use when visualizing data.

Gluons glue together quarks to form protons and neutrons. The odd thing (pun intended) about gluons is that odd numbers of them don't like to be together; only even numbers of gluons are typically found. Well, science has proven the existence of odderons (a clump of an odd number of gluons) by smashing together protons at high speed.

The taste of chocolate comes, in part, from fermentation. I did not know that.

The notional F-36 Kingsnake is a fighter aircraft to replace the F-16. It is compared to a Nissan 300ZX and because I'm not a car guy I have no idea what that means.

Yes. It's time for True Facts: The Bats! and Trap Jaw Ants.

A long article on how the music industry is strangling economically the musicians from whom they make their money.

Baby born with 3 penises makes history. Because 2 penises was a snoozer, apparently.

A beginner's guide to ambient music.

Based on imagery from the JAXA Kaguya Orbiter, enjoy Earthrise in 4k UHD.

Give a listen to a preview track called The Giant Nothing from Supervoid.

What happens when scientists write haiku?

Opening 20 June at The Modern is Sean Scully: The Shape of Ideas.

Said to be a classic and a very approachable introduction to the subject, Thompson's Calculus Made Easy (1910) is now available in an online HTML version and a PDF version.

This could be very handy: Ojoy, upscale an image while improving its quality.

Ze Frank's True Facts is at it again: Deception in the Rainforest and Dangerous Little Ticks.

Science discovered that pigs can breathe through their butts. Doctors wondered whether this gave them an option when treating human patients with lung problems. I think you see where this is going.

Speaking of butts, ever wonder how they evolved?

Happiness is the way. ~Buddha