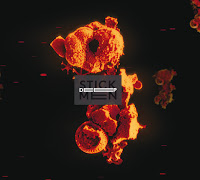 The first track on Stick Men's latest album, Deep, is titled Nude Ascending Staircase. I can't help but compare it to Gerhard Richter's Ema (Nude Descending a Staircase) 1992 in the collection of the Fort Worth Museum of Modern Art. The latter seems to embody a sense of finality while the former implies the promise of what is to come. And that's exactly the promise that's fulfilled by Deep.

Tony Levin (Chapman Stick), Markus Reuter (touch guitar), and Pat Mastelotto (drums) might appear at first glance to be the rhythm section of a much larger band but with their unique instruments and pure skill at playing them the result is a richly melodic, highly percussive, and fun suite of music.

Deep consists of 9 tracks, mostly within the 4-6 minute range except for the last two. Sepia and Whale Watch clock in at nearly 9 and 10 minutes, respectively.

I've already hinted at the opening track, Nude Ascending Staircase. Rumbling up-tempo baselines are paired with Mastelotto's drumming and bonded with a soaring melodic line that taken together is tight, tight, tight. These guys are ripping it up. This is followed by On Off, a slower piece with almost a wave-like feel emphasized offset by an intricate guitar line just under the surface. The entire third track, Cusp, has the entire trio playing percussively - or stated differently, Mastelotto's drumming joins the melody.

Hide the Trees is one of my favorite tracks from the album as it covers a lot of musical ground from a tight rhythmic core to a funky melodic line. Crack in the Sky features spoken word lyrics (presumably by Levin) and I'm not sure they contributed anything to the song. Next comes the likable Horatio followed by Concussion in which everyone seems to be playing the percussion part to wonderful effect.

Sepia brings together everything that makes this trio of performers so fantastic - great interplay and layering of sound, back and forth melodic and percussion lines, and unassailable technique. And finally there's Whale Watch. Levin in particular always seems to have a great sense of humor and I can't help think he's being a bit self-referential here as this 10 minute bombastic, progressive piece brings Deep to a resounding conclusion. (It also sounds more like Levin's solo work than any of the other tracks.)

There's no noodling around or improvisation on Deep (at least to my ears). It's a rigorously scripted, tightly played, and wonderfully produced album of progressive rock music.

Deep was a "direct to fan" project on PledgeMusic where I purchased (and am still waiting to receive) my autographed copy of the CD. This review was based on the mp3 downloads.