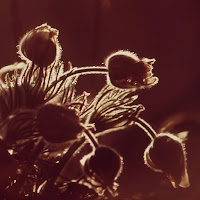 Why do I often begin discussions of ambient drone with a quasi-apology like "Drone isn't for everyone but..." It's not like we're talking about Country & Western. <rimshot>

Then again, no genre of music is for everyone.

Here, for now by Celer & Nicholas Szczepanik is a 2015 digital only release of a recording the pair did together back in 2012. The album consists of four tracks, consecutively and Romanly enumerated I, II, III, and IV.

When I hear the music and think of the album's title I visualize sitting on the shoreline of a vast river, slowly and steadily gliding past with the sun setting on the opposite shore. There's the sense of great depth and understated power yet subtle undercurrents swirl just beneath the surface. There's a constancy and timelessness but yet transience as the water flows by. The river's surface is flickered and dappled with accents from the low angle sunlight.
"I don't know much about music but I sure like the sound it makes."