I think I've found another contender for my annual list of favorite albums: the two albums that comprise Midori: Live in Tokyo 2015 by Stick Men+.

All the details are below but let me jump right to the chase. The recording of these two live albums is head and shoulders above many out there. In addition to the immediacy and intimacy you hope for in a live performance, each performer in this recording is given extensive spatial depth and aural clarity resulting in an almost three-dimensional effect. You want to turn up the volume, not to be hammered by a wall of sound but to fall into the expanding soundscape.

Then there are the performances. Stick Men by themselves are spectacular (see 2014's Power Play, their live recording based on the Deep album) and on Midori the result is not "Stick Men and a fourth performer" it's truly Stick Men+; a truly integrated quartet. Cross' performances weave throughout the other players binding them even closer together and nowhere is this more apparent than on Shades of Starless, a beautifully arranged tribute to King Crimson's album Starless and Bible Black.

And now some details.

Let's decompose the name of the album and band. Stick Men are the prog rock trio of Tony Levin (Chapman stick), Markus Reuter (Touch Guitar), and Pat Mastelotto (drums and percussion). On their recent tour of Tokyo, they were joined by 1970's King Crimson violinist David Cross. This quartet went by the name Stick Men+. They released two separate live albums - First Show and Second Show - as subtitles under the main title Midori: Live in Tokyo 2015.

The two shows are mostly different but with some overlap as listed below. 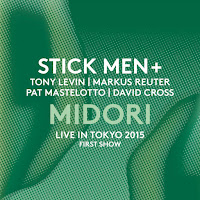 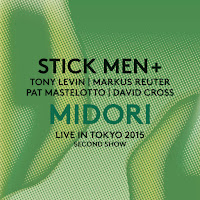 As you can see from the track lists, the addition of Cross seems to have let the quartet delve deeper into the King Crimson catalog in addition to plundering music from Stick Men's four studio albums.
Don't hesitate. Any fan of progressive rock, King Crimson, and/or Stick Men should buy this album. Note that it's only available for download except in Japan where you can get the CDs.
"I don't know much about music but I sure like the sound it makes."

I received no compensation of any kind for this review.
Posted by John at 4:05 PM